Doctor Who - Daleks in Manhattan & Evolution of the Daleks 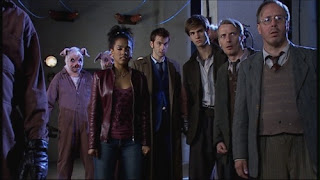 Our Doctor Who expert, Tony Cross, is journeying through all of time and space to bring us his thoughts on every available Doctor Episode. Today is the Tenth Doctor adventures Daleks in Manhattan and Evolution of the Daleks...

The first two-part story of Series 3 rolls out The Daleks, again. It plops them in New York. I think this was supposed to be something of a blockbuster, but it doesn't quite work. In fact, I suspect we should refer to it as Disappointment of the Daleks going forward.

This isn't entirely the fault of Helen Raynor, who wrote it or James Strong, who directed. It just seems to be one of those stories that in practice doesn't do what it might have been able to do on paper.

Of the two episodes I think Daleks in Manhattan works best. It does a fine job of getting all its ducks in a row for The Evolution of the Daleks. Unfortunately, then the ducks go off on a drunken rampage.

We meet our main principles. Being Doctor Who some of them will die. Of course. We have Mr Diagoras (Eric Loren) who has gone from building foreman to Dalek minion; the lover Laszlow (Ryan Carnes) and Tallulah (Miranda Raison); Frank (Andrew Garfield) and Solomon, the voice of - erm - wisdom (Hugh Quarshie). Oh, and the Pig People. The poor Pig People. Of whom Laszlow, kidnapped from the theatre, is one. The Tallulah-Laszlow story is rather sweet but peripheral.

I must confess to like Tallulah. I know she's a little bit of a cliché, but Miranda Raison makes her one of the more vivid of guest characters. In comparison most of the others fade into the background a little. Except for Hugh Quarshie who does a fine job of being the 'good guy in the real world' making Solomon more than just a cypher.

We get to see the Daleks before the Doctor works out they are here, which is nice. There is no point in hiding them because the title gives it away a tad. Helen Raynor fails to take a leaf out of the Terry Nation Big Book of Doctor Who Writing Tips, which would mean their appearance is the end of episode cliff-hanger. Instead our cliff-hanger is the first sight of the hybrid Dalek Sec: "I am a human Dalek." he wheezes. Cue titles.

Unfortunately the hybrid's make-up doesn't really work. It looks too much like a mask, which brings us back to the danger of tentacles in Doctor Who. Even small ones. That puts the whole story a little on the back foot. In fact, the whole transformation sequence, from the moment Dalek Sec throws out a vast wave of green guck to absorb Mr Diagoras (but keeps his suit in almost perfect condition), doesn't quite work for me. It's all a bit silly. 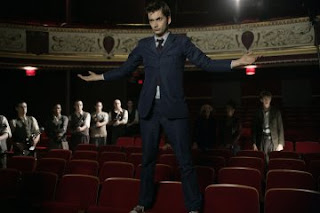 Evolution of the Daleks itself has one brilliant thread running through it and that's the Daleks themselves. Their devious plotting, their secret meetings and their 'not convinced by this' looks at the newly hybridised Dalek Sec are brilliant. The Daleks are always at their best when they are at their most devious. And they're the best thing in this episode.

You know Dalek Sec is in trouble and both he and the Doctor seem ignorant of the sly glances and suspicions of the Daleks. The problem is, of course, Dalek Sec is too human (and seems to prefer the human side of his personality to the Dalek one). He's shocked when the Daleks kill Solomon, especially as they've waited kindly for Solomon to finish his speech. He realises that the Daleks as they are will survive. Nothing more. Nothing less. Dalek Sec wants more. Unfortunately, he's forgotten too much of his own Dalekness to remember what they're like.

The new Human-Dalek hybrids will be without tentacles. They'll be more human, which is really the final plunger in the coffin for Dalek Sec's colleagues who rebel creating an army of Human-Dalek hybrids that are physically human, mentally Dalek. So basically, Cybermen without all the armour.

The Doctor, of course, foils this plan. The last Dalek, Dalek Caan, does the emergency temporal transfer thing and escapes. Probably to avoid the Doctor's offer of help. I'm not quite sure why Dalek Caan doesn't shoot the Doctor at this point rather than let him deliver a speech about compassion.

In fact, the Tenth Doctor is a little irritating in this story. All death wish, pontificating and shouting. He wins, of course, but at something of a cost. Lots of innocent - and not so innocent - people die in this story. Lots of them. It's rather brutal.

So - putting my best Tennant sad face on - I'm sorry. So sorry. But this isn't great. There are some good ideas in here, some nice performances and some good moments but it doesn't work. Like Fear Her or going back further Battlefield there's a good story in here that didn't quite make it.

I think partly because of the whole Human-Dalek thing. Dalek Sec's just a distraction in the end from the brilliant sneakiness of the actual Daleks (and is hamstrung by a slightly wooden delivery). Plus, the Doctor - Martha aren't quite up to their previous standards in my opinion.

If the story had been just the Daleks lurking in the sewers trying to convert humans into Daleks, then I think Season 22 would probably want to have a quiet word. (As might Resurrection of the Daleks).