Doctor Who - The Fires of Pompeii 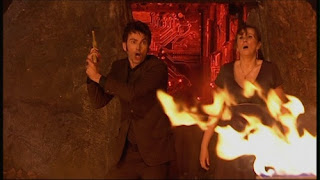 Our Doctor Who expert, Tony Cross, is journeying through all of time and space to bring us his thoughts on every available Doctor Episode. Today is the Tenth Doctor adventure The Fires of Pompeii...

I really enjoyed this. More so than I did the first time of watching.

First, it looks great. Filming at the Cinecittà studios gives the external scenes a hook into reality that the story benefits from. Then the Pyrovile's look great and genuinely rather threatening - even if they can be seen off with a bucket of water - and the final explosion of Vesuvius must be one of the best special effects sequences the programme has ever produced.

Second, it's got Catherine Tate in it. I'm sure there are people out there that don't like Donna Noble. Those people are wrong. She's the perfect companion for the Tennant's Doctor, even better than Rose. Yes, she's occasionally loud and mouthy but she also asks interesting questions, tries to understand people and she won't let the Doctor get away with fobbing her off. And the moment she puts her hand on the Tenth Doctor's and the Pyrovile control 'button' so that the Doctor doesn't have to take the responsibility for all the death that follows is one of the most magnificent Doctor - Companion moments in the series history.

The thing about Catherine Tate is that she seems to bring out the best in David Tennant too. The scenes between the two of them debating who lives and who dies are excellently played, adult - in the best sense - and moving. Donna's appeal to the Doctor to 'just save someone' is lovely.

There's also a rather nice bit of dialogue between the two of them that explains how the Doctor (and I assume other Time Lords) see the universe: fixed points and non-fixed points. It makes you wonder how the Doctor functions without getting dizzy at all the alternatives that he must get to see when looking at everything and everyone, but it's nicely done.

I love the music in this episode too. Especially for the scenes within the Temple of the Sisterhood (who bear a resemblance to the Sisterhood of Karn outfit wise. Perhaps there's an intergalactic, cross-temporal shop for people to buy bulk outfits: Cults R Us or something. Anyway...)

A great guest cast helps too. Whilst Phil Davis as the seer Dextrus isn't asked to do much except scowl and grump he does so with style. Peter Capaldi, who is like a God in this house, as Caecilius (which must be a nod to the Cambridge Latin Course surely) is also excellent even if again the character isn't given much more than one dimension.

A nod to for Victoria Wicks as the High Priestess (who I'd never have recognized as Sally Smedley from 'Drop the Dead Donkey'); Francesca Fowler as Evelina and Tracey Child as Metella. Obviously, this blog can't go by without mention Karen Gillan's first Doctor Who appearance as one of the Sisterhood. So there. I've mentioned it.

A couple of quibbles: Donna and the Doctor's escape from the exploding volcano is a tad unbelievable, which I know seems harsh based when reviewing a programme featuring time machines, Time Lords, Pyroviles etc. but you know I'm an incoherent perfectionist.

To conclude: a good story, which might have been improved with stronger supporting characters. The actors themselves do a lovely job. It's the writing that lets them down a bit in my view. But plot wise - miraculous escape aside - nicely done.

Roll on 'Planet of the Ood'