TV - Inside The American Embassy 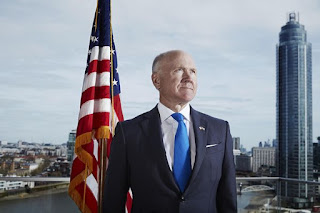 Tonight sees the first part of a new Channel 4 documentary series, Inside The American Embassy...

Filmed over a nine-month period, with unprecedented access, Inside the American Embassy goes behind the closed doors of the American embassy with America's top-level diplomats to experience, first-hand, diplomacy in the age of Trump. There's a new ambassador in place, and there's a major relocation to a new embassy site. The ambassador's agenda is to use Brexit as a chance to promote 'America First'.

In part 1, Trump's Man In Britain, airing tonight on Channel 4 at 10 pm, we meet close, personal friend of Donald Trump and billionaire businessman, Woody Johnson, the new U.S. Ambassador to the UK. Johnson is on a mission from the President and has a message for the people of the UK to make the most of Brexit. Following the Ambassador’s first six months in office, this episode offers an unrivalled insight into the Embassy as it makes its historic move from Grosvenor Square to Vauxhall. An unexpected public affairs challenge sees the Ambassador and his press team deal with the fallout from some of Donald Trump’s more controversial policies and inflammatory tweets, including an attack on Theresa May for criticising his retweet of a far right video.

Part 2 is called Trump's UK Border and visits the consular section of the American Embassy. This is the first line of defence for Trump’s America and, each day, over 800 visa applicants are interviewed and judged as to who can and can’t enter the USA. Consular staff are followed as President Trump’s controversial travel ban comes into force. This was the executive order that halted all refugee admissions and temporarily barred people from seven Muslim-majority countries. At this time of heightened scrutiny, consular staff must sort through the Florida’s sun seekers and business people to spot the would be economic migrants, terrorists, money launderers, and former criminals, all trying to convince the person behind the window that they should be allowed in.

In the final part of this 3 part series, Guns, Diplomacy and Chlorinated Chicken, top officials are followed to capture the impact of Trump's America First approach to diplomacy. Trump-appointed Ambassador Woody Johnson challenges his staff on how they are tackling Brexit and questions if the multi-billion pound deal to sell US fighter planes for Britain's new aircraft carrier, the Queen Elizabeth, is a great deal for America. The administration is fighting trade wars on several different fronts and the new Trump appointed Under Secretary of Agriculture, Ted McKinney, pushes for Britain to open its doors to American chlorinated chicken. There is a unique look at the inner workings of the special relationship through the eyes of the embassy’s top general, as Britain and America prepare for joint air strikes to Syria and as the ambassador lobbies for the UK to spend more on defence.

Inside the American Embassy is on tonight on Channel 4 at 10 pm, repeated on Thursday 28th at midnight.