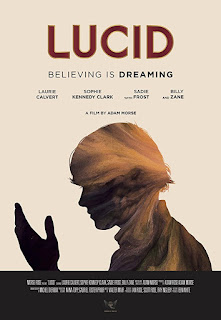 Lucid dreaming, that state where, when you are asleep, you become aware that it is “just a dream” and you can influence and manipulate events around you without any danger to yourself, as a phenomenon has fascinated me for a long time. I can do it, kind of. Not deliberately like some people can but when, in a dream, I realise that it IS a dream (for me, it’s a flag when electrical stuff like light switches don’t work properly) I can stay in the dream and make changes. So I was intrigued when I saw in the EIFF brochure that someone had used the concept as the basis for a film.

In this film, the lucid dreaming techniques are used to help a young guy, Zel (we never find out what, if anything this is short for), to practise talking to the girl of his, now literal, dreams, a dancer called Jasmine (Felicity Gilbert) who has a flat in Zel’s building. He is taught the techniques by Elliot (Billy Zane), an ex-Doctor and now alternative therapist, who also stays in the block, who advised Zel to stop his diazepam and sleeping tablets regime (again it’s never mentioned what for) and work on taking control of his dreams. It’s obvious from the start that social-anxiety help is needed as Zel (sensitively played by Laurie Calvert) comes across as highly apprehensive, indecisive and unconfident, a situation not helped by a domineering and over-protective mother (Sadie Frost) and a wide-boy abusive bully of a boss (Cristian Solimeno) where he works as the car park attendant at a private members club. And it’s the club that forms the location for Zel’s dreaming, with Jasmine appearing as an exotic dancer onstage before dressing and coming to the bar where Zel, looking sharp in a suit instead of his usual sweatshirt, plucks up the courage to talk to her, although things don’t quite work out as planned as Zel finds the lines between real life and fantasy start to blur.

On the surface, the plot of this film seems a little thin and predictable – a boy obsesses about an unobtainable fantasy girl while ignoring a different real-life girl that is interested – and the lucid dreaming addition may be seen as a bit of a gimmick, a MacGuffin to allow the fantasy dream sequences, both the pleasant and unpleasant ones, to fit into the narrative. And if that’s how you want to read the film then fine, that’s what you’ll get if you want to be spoon-fed and join the dots in such an obvious simple pattern. But, for me, there’s more to this movie than just the linear story. Firstly, it looks and sounds amazing. The cinematography is stunning and makes the most of the locations, the costumes and the lighting adding a golden glow to the dream sequences to make them even more ethereal and disturbing. The soundtrack adds to the atmosphere too and helps to build Zel’s character from his anxiety-ridden edgy, discordant start to a smoother, more confident, composed finale. Secondly, the film gets its theoretical research right; the steps to practice lucid dreaming that Elliot explains to Zel are the generally accepted way to begin and it’s not considered to be dangerous to do, although it may not work for, or be helpful to, everyone.

But the best thing for me about Lucid is Billy Zane. He manages to imbue what should be a minor supporting role with such character and mystery that he drew all my attention while he was on-screen. I wanted to find out more about Elliot, what he did, who he was, why things went wrong in his life and how he pulled it back together enough to continue. A fascinating character presented by a much under-rated actor. On reading the production notes after watching the film, it seems that the director Adam Morse gave Zane pretty much free rein on his character, with a lot of the dialogue ad-libbed and Zane’s comfortableness in his portrayal of Elliot just shines out of the screen.

I think, looking back through my own notes on Lucid, that different people are going to get different things from the film. It will depend on their expectations going into it, and how much they are willing to invest of themselves, as to how they feel about it at the end. Much like a lucid dream, it takes a bit of effort and imagination but it’s definitely worth trying.