Doctor Who - The Shakespeare Code 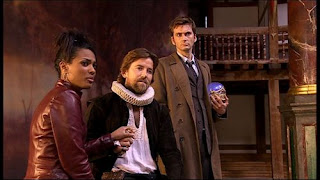 Our Doctor Who expert, Tony Cross, is journeying through all of time and space to bring us his thoughts on every available Doctor Episode. Today is the Tenth Doctor adventure The Shakespeare Code...

So, Martha's second story drops us into London, 1599 as a thank you according to the Doctor. A one-off trip. As they're in London, 1599 then why not drop into the Globe - the original one - and see a Shakespeare play and - indeed - Shakespeare himself.

Of course, being Doctor Who, that can't possibly be the end of it. In the background are three 'witches' aka Carrionites. The Carrionites are another of those races from 'the dawn of time' that no one is sure were 'legend or reality'. It's good the dawn of time. It's always coughing up these new races for the Doctor to go head-to-head with.

The Carrionites have a science based on words, rather than numbers. Or at least I think that's what they have. There's a lot of talk about the power of words, which is nice. I like it when Doctor Who takes things like words seriously. There's also a lot of buttering up of J.K. Rowling, perhaps in the hope of getting her to write an episode.

Anyway the Carrionites have manipulated Shakespeare into writing 'Love Labour's Won', which ends with a nice speech designed to summon their sisters from the dark place into which the Eternals - nice bit of Classic Who throwaway there - have banished them. It was Shakespeare's grief at the death of his son, Hamnet, that freed them in the first place.

There's a lot of talk about Shakespeare's genius and I'm not going to knock that. The man clearly was a genius. There are few writers who can open the human mind and personality quite so perfectly as Shakespeare does in his best plays. Gareth Roberts has some fun with Shakespeare's appearance, with Martha commenting on him 'not looking like his portraits' and with his sexuality. He flirts with both Martha and the Doctor - "57 academics just punched the air" - although he seems much more interested in Martha.

Gladly there's no Shakespeare didn't write Shakespeare nonsense. Nothing more irritating than Shakespeare denialists who seem keen to establish that no 'mere' actor could possibly have written such great works. They must surely be the work of an aristocrat. This is just plain snobbery in my opinion. I find it astonishing that some of the people who believe this - Derek Jacobi I'm looking at you - are actors themselves and clearly have a surprisingly low opinion of their own profession.

Sorry about that. Back to Doctor Who.

This is Martha's second story and Freema Agyeman does a fine job asking all the dumb questions - butterflies & grandfathers - that you and I would ask and generally having a fantastic time being in the past. I like the fact that Martha comments on the smell. The one thing time travel films and television often overlook in all their keenness to get things accurate is how smelly the past must have been. Seriously. Shakespearean London must have stunk.

Tennent has fun with this too, although I'm not convinced by his shouty-angry bits. I think he struggles occasionally to make them convincing, like Sylvester McCoy. But as I said I like that. The Doctor is always more terrifying when he's quiet - see Matt Smith in 'The God Complex'. Tennant's not always a bad shouty actor but rage is not always his thing.

The Shakespeare Code is the third in a line of what can only be referred to as 'The Celebrity Historical', after Dickens, Queen Victoria and Mme De Pompadour. It's becoming a bit of New Doctor Who trope. And we don't just get Shakespeare, we get a special guest appearance from Queen Elizabeth I at the episodes end. Time travel as OK Magazine.

I like Dean Lennox Kelly's Shakespeare. He's Shakespeare as rock star. Not quite as pretentious as Jim Morrison but chilled out, self-confident and charismatic. Of course, no one has a clue what Shakespeare was like in real life. He could have been as dull as an accountant of cliché, but you must assume, based on his writing; the fact that he acted and ran a theatre company that he was a tad more interesting than that. The episode skirts around the issue that I got annoyed with in the Eighth Doctor and Mary Shelley Big Finish stories, which is undermining the power of Shakespeare - or Mary Shelley - by making it look like all their ideas were fed to them by the Doctor or their experiences with the Doctor. Fortunately, it doesn't quite go that far, although there's a good running joke about Shakespeare stealing lines from the Doctor that are Shakespeare's lines. Or will be.

Again, though this was good fun. I've probably taken it far, far too seriously above but I enjoyed it and as I've said before in these articles, as far as I'm concerned, the biggest sin that Doctor Who can commit is to be dull and The Shakespeare Code is anything but that.