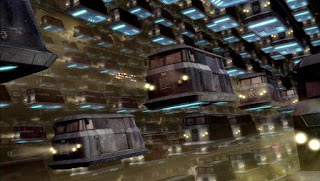 Our Doctor Who expert, Tony Cross, is journeying through all of time and space to bring us his thoughts on every available Doctor Episode. Today is the Tenth Doctor adventure Gridlock...

It seems to slip most people by, but I absolutely love it. All the stuff that seems to put bees into people's bonnets, I couldn't care less about. Irish cat person has kittens with humans. Well done them. Elderly, happily married lesbian couples. About bloody time.

These are but petty things.

The reason I love this story is that it is a perfect illustration of why the Doctor (and Doctor Who) is so brilliant...or in the words of Thomas Kincade Brannigan (Ardal O'Hanlon), 'a little bit magnificent'. The Doctor's unwillingness to accept the status quo, to ask the questions that other people won't ask and to look for solutions are all shown in style by the Tenth Doctor in this story. His willingness to risk his own neck for someone - Martha - who he hardly knows is as indicative of the Doctor's magnificence as The Fifth Doctor dying to save Peri. He bought her here. He's going to bring her back.

So with Sonic Screwdriver in hand he climbs downwards towards Fast Lane where the kidnapped* Martha has found herself. Down in the smoke and the dust, where lurks the unknown. A place where legends tell of disappearing cars (which we've already seen by that point) but what terrible creatures are doing all this...?

Well, bloody hell, it's the Macra. A one-off Doctor Who monster from the Classic Series. De-evolved to be just large and aggressive their appearance is a nice little titbit for the old school Doctor Who fans. One of those little reference which we're allowed to pick up on but probably mean nothing to most of the people watching.

Martha and her captors (who btw are probably the nicest kidnappers the Universe has ever seen), Cheen (Lenora Critchlow) and Milo (Travis Oliver), find themselves in real danger but Martha is confident that the Doctor will think of something. But in the end, as Cheen, points out 'we're relying on a stranger to save us'.

And that may become a very important line.

It is also one of those lines that contains a seed of a deeper truth. Sometimes we do need to trust a stranger to save us. Sometimes a stranger might be the only person who can. (Sorry, I came over all American there for a moment).

But again Martha puts in to words what this story is all about: "You've got your faith and your songs. I've got the Doctor." And so, do we.

Running parallel to this is Novice Haine's (Anna Hope) and the Face of Boe (Straun Roger - the voice at least). We can tell from the cars that something isn't right about these perpetual traffic jams, but it takes Novice Haine to explain what happened and why. Novice Haine's left over from New Earth doing penance for her sins. As the Doctor realises she could have left but she stayed, and she helped the Face of Boe protect the people of the under-City from catastrophe.

The Face of Boe gets to deliver his big secret, even if it must be couched in vagueness, as he dies: "You are not alone." He says to the Doctor, but what does that mean. Perhaps we'll find out latter.

There's a fantastic little scene at the end where - as the City sings 'Abide with Me' - The Doctor explains to Martha what happened to his people and his planet. Why he lied to her at the beginning of the episode. I love this scene. I'm not sure if it is Tennant's performance or 'Abide with Me'** that does it but I'm afraid I got a little tearful at the end.

Here he is, The Doctor, all alone but still prepared to risk everything for a person he hardly knows and saving the rest of the world in the bargain. How can that not be a little bit magnificent?

Doctor Who: it's bloody brilliant.

*If you've come looking for an article with a coherent grip on plot details then you're in the wrong place. This is purely post-watching impressions only I'm afraid. If you want to know what happens in a story: watch the story. ;-)

**Abide with Me is a bit of a tear-starter for me. It reminds me of my Mum because it reminds her of her late father. It's a little bit hard to explain why it makes me sniffle but it does. And at the end of this episode...Perhaps it reminds me that I'm not quite as hard-bitten and cynical as I like to pretend.