Doctor Who - Utopia, The Sound of Drums & Last of the Time Lords Our Doctor Who expert, Tony Cross, is journeying through all of time and space to bring us his thoughts on every available Doctor Episode. Today is the Tenth Doctor adventures Utopia, The Sound of Drums and Last of the Time Lords...

And so, it ends. Series Three. With an epic three-part adventure in time and space and it starts off brilliantly with Utopia where the Doctor, Martha and a re-appearing Captain Jack find themselves at the end of the Universe.

Here the scattered survivors of humanity - plus some sharp-toothed cannibals known as Future Kind - have gathered with a view to reaching Utopia, where the last stand against the end of the Universe is rumoured to be taking place. There's a rocket but Professor Yana (Derek Jacobi) is having trouble getting it ready for launch.

Fortunately, the arrival of the Doctor and crew kick start the project and the rocket. It also starts off a whole bucket load of trouble. For Professor Yana has a watch. A similar watch to the one that the Doctor had in Human Nature-Family of Blood and Martha has noticed it.

It's Martha's reaction and the steady drip-drip of words from the past that make Professor Yana pay proper attention to the watch. And before the Doctor can reach him the Professor opens the watch...and The Master is re-born.

Derek Jacobi's performance as Professor Yana-The Master is one of the best by any actor in the entire history of Doctor Who. His transformation from Yana to The Master is done almost entirely with the eyes. It's wonderful to behold. Professor Yana was friendly, slightly dotty and rather charming. Jacobi's Master would have been made one hell of an opponent for the Tenth Doctor, but he's shot by his assistant Chantho (Chipo Chung) and is forced to regenerate. Into John Simm.

The Master nicks the Doctor's TARDIS, which - we will discover later the Doctor managed to semi-knacker before disappearing. Unfortunately, that dumps the Master on present day Earth. Where he's off to do devious Master-ish things. Starting with taking over the world. I sometimes think of the Master as Brain from Pinky and The Brain: "What are we going to do today Brain?" says Pinky at the start of every episode. "The same as we do every night. Take over the world." The Masters persistence in the face of constant defeats is almost cartoonish. Now he's back there's no end to his evil.

Anyway, I digress. Utopia is a brilliant episode, perfectly paced by director Graeme Harper and superbly acted. It does a great job of re-introducing the Master, tying up some of the seeds sown in earlier episodes and launching us into the final two episodes. 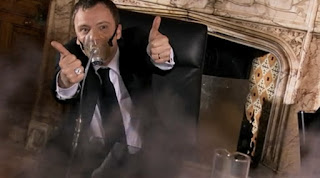 The Sound of Drums is effectively an entire episode devoted to explaining what the hell's been happening since the Utopia, what the Master's plan is and getting the Doctor to the point of almost total defeat.

There's some rather silly stuff in here and Simm's performance occasionally goes over the line into ham, especially some of the grinning killing moments. Which makes the tone of this episode a bit weird. An example is the mass murder of the entire cabinet and the brutal dispatch of journalist Vivien Rook (Nichola McAuliffe) done almost as comedy.

But I realised when discussing this yesterday if there weren’t these more 'light-hearted' scenes and the Master's was deadly serious then The Sound of Drums might have turned into one of the darkest and bleakest episode in the programme’s history. There's so much horror going in on here and at the end of the episode the Doctor looks utterly defeated. And the Master's decision to decimate the Earth - in its very specific original meaning - is nasty even by his low standards.

By this point The Master had managed to make himself Prime Minister, acquired a wife called Lucy (Alexandra Moen), round up Martha Jones entire family (except Leo), set up a telepathic satellite network to help him hypnotise the Earth, set up an arrangement with The Toclafane', turn the TARDIS into a paradox machine, built a 'laser screwdriver', used Professor Lazarus's technology to enable him to age the Doctor....say what you like about the Master but his work ethic is pretty damn impressive.

It's not looking good. But Martha has escaped and the Doctor's given her a job to do.

Oh, and there's a couple of rather lovely scenes: The Doctor's discussion with Jack and Martha about Gallifrey and who the Master is and The Doctor and The Master's telephone conversation. Which shows what Simm's capable of when he dials it down a bit. 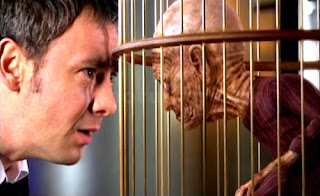 The Last of the Time Lords is set a year later. The aged Doctor is being kept as a pet by the Master, Martha's family are working for the Master as servants/slaves, Lucy Saxon's gone oddly stoned and Martha's been travelling around the world on a mission. Now she's back.

Mostly this isn't bad considering the whole purpose of the episode is to get us to the end when the Doctor undoes the Master's plan and wins through. There's a couple of false dawns. Jack gets killed again. The Doctor gets aged to the point at which he turns into a sort of wide-eyed wrinkled little thing. Like Gollum but with Deputy Dawg's eyes.

Martha's plan is explained to Professor Docherty (Ellie Haddington) and Thomas Milligan (Tom Ellis). One of whom, of course, betrays her to the Master. The other one dies. Martha is captured and it all looks like it is over.

The Master has destroyed the weapon that she was sent to find by the Doctor and is about to die. But it's all an enormous double-bluff. As Martha explains to us (and The Master). The weapon was a bluff. Instead she's been travelling the world telling everyone about the Doctor and the Doctor's been...well I won't spoil it all for you.

Suffice it to say the end is the Doctor - like fairy - gets believed back to normal. It's the Doctor as Jesus. He gets to fly (and I have a friend who has a very convincing explanation about Time Lords being able to fly) and forgive The Master for his terrible crimes, which is rather magnanimous of him all things considered.

The Toclafane are banished back to the paradoxical future when the Paradox machine is destroyed by Captain Jack and we go back in time a year to the moment just after The Master has executed the President of the USA. Nothing ever happened but Martha, the Doctor and her family remember. So, does the increasingly lop-sided Lucy Saxon.

Just when it looks like the Doctor is about to settle down somewhere with the Master Lucy shoots him. And in a bizarre fit of pique - cutting of his nose to spit his face on an epic scale - he dies, refusing to regenerate. The Doctor weeps.

Martha stays behind. To look after her family and because she's realised that she can't waste her life trolling around the universe with a Doctor who can't - or won't - love her. It's a sensible decision and surprisingly realistic one for Doctor Who.

But it isn't over. At the end a hand picks up The Master's ring from amongst his ashes. This is Doctor Who the Brain...sorry, the Master can always come back.

So three episodes. It's well paced & directed. The acting is pretty much up to snuff and there's some great scenes throughout, but it fades a bit as we build towards the final acts and frankly the Doctor as Jesus is rather syrupy, not to say silly. I wish the end had been more rooted in something real (which I know is massively contradictory when I'm talking about a science-fiction series but to (sort of) quote Walt Whitman, "Do I contradict myself. Very well then, I contradict myself. I am large, I contain multitudes).

Simm's Master is a grower. Far better when calm and quiet than exuberant and grinning. It's a good return for the Master and it is nice to have him not be the cool cat with the beard for a change. He's manic. He hears drums. He's one roundel short of a full TARDIS but he's pretty good in the end.

And what of Freema Agyeman’s Martha. She's had a season and although I don't think she's the best actress in the world she's had her moments and it will be interested to see who they replace her with. But first Kylie Minogue.