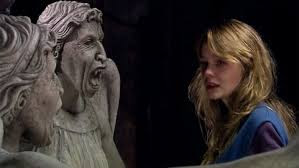 Our Doctor Who expert, Tony Cross, is journeying through all of time and space to bring us his thoughts on every available Doctor Episode. Today is the Tenth Doctor adventure Blink...

After the double-whammy of delight that was Human Nature - The Family of Blood we get Blink, which is equally wonderful but in quite a different way.

A little more light-hearted and Doctor lite, the episode is driven by a brilliant performance from Carey Mulligan as Sally Sparrow. I'm not sure where on her rise to Hollywood glory Mulligan was at this point but you can spot an actor destined for good things here. Sally Sparrow will probably go down as the Doctor Who companion that never was, which is a shame.

The story also introduces us to the Weeping Angels, a set of creatures so gobbledygook that their very existence is dependent on not looking each other. They're 'quantum locked' apparently. That probably means something to someone but like a lot of Doctor Who science sounds a lot more convincing when delivered by a good actor at ninety-five miles an hour - for which I salute David Tennant once more. If you stop to think about it for a moment then it becomes less convincing, like government economic policy.

The Weeping Angels are nicely sinister though, which is great, and Blink is nicely atmospheric. The Weeping Angels method of 'killing' people is also rather civilised, if a little confusing. No one really 'dies' but their potential...creatures of the abstract.... blah-di-blah. You know it looks less fun written down than it does on screen.

Blink is great fun though and a highlight of Series Three so far. Not THE highlight, which I reckon is Human Nature-Family of Blood but still damn good.

It's also another Moffat script, which means playing around with the concept of Time travel and how time isn't quite as straightforward from the outside as it is from the inside. No Time's Arrow here, more Time's Wibbly-Wobbly Ball of Rubber Bands. Moffat is certainly a clever and thoughtful chap but I don't know, it feels a little like cheating sometimes. Like the Sonic Screwdrivers 1001 get outs for the Doctor Who writer, the 'leaving notes for yourself' school of Time Travel just doesn't seem very Doctor-ish to me. I like it when he has to respond to everything on a wing and a prayer, not a wing, a prayer and a series of helpful hints a future self has provided for him.

I am aware as I type all those words that I'm doing a bit of time travelling of my own, criticizing the over-whelming Moffatness of the future seasons rather that talking about Blink. Blink is also rather different in that it is Sally Sparrow who helps the Doctor with his future and so feels slightly less convenient than they sometimes do.

Partly of course I'm having a problem padding this out. It's always harder to write these articles when you like what you've seen, and I do like Blink a lot. I like Sally Sparrow. I like Larry Nightingale (Finlay Robertson) who makes a good foil for Sally. I like the melancholy ending to DI Billy Shipton's story. I like the pace and direction from Hettie MacDonald. I like the 'let’s scare the kids' post-story coda. I like the stories lightness of touch. I like the design of the Weeping Angels. I like the line about chickens.

So, you see it's hard to say much else. I do miss the Doctor, but this would have been a much different tale if he'd been there and Sally and Larry wouldn't have had quite so much room to breathe as characters.