Documentary - Half the Picture 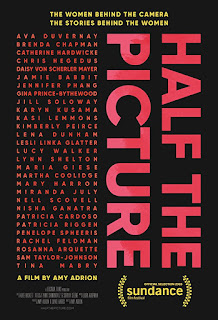 Putting female film-makers firmly in the frame, Ren Zelen watched the documentary Half the Picture at Sundance London...

Director Amy Adrion was recently awarded a special ‘What Next’ Prize at the Sundance London festival for her documentary Half The Picture, which examines the persistence of the gender gap in Hollywood and the reasons why there are so few female directors. Adrion’s film poses the question: ‘What can you do if you're a female filmmaker and there are so many barriers to fight against, that you start wondering if it's all a pointless exercise?’ (A Q&A with the director followed the initial screening of the film).

The movie uses the current EEOC investigation into discriminatory hiring practices as a framework to talk to successful female directors about their careers, their struggles, aspirations and hopes for the future. The film features interviews with women filmmakers including, Ava DuVernay (This in the Life, I Will Follow, Middle of Nowhere, Selma, A Wrinkle in Time), Mary Harron, (I Shot Andy Warhol, American Psycho, Alias Grace, The Notorious Bettie Page) Sam Taylor-Johnson (Nowhere Boy, 50 Shades of Grey, Love You More), Catherine Hardwicke (Thirteen, Twilight, Red Riding Hood) and Lena Dunham (Creative Nonfiction, Tiny Furniture, Girls) amongst others.

All the female directors reveal shocking and comical anecdotes about the prejudice they have encountered: being ignored by male subordinates, sexist in-jokes from all-male crews, patronising suggestions about how to do their job, sexual harassment of various kinds, pressure to feature female nudity in their films, and various offensive demands as conditions to securing film work.

When Kathryn Bigelow finally became the first woman to win an Academy Award for best director for the Hurt Locker in 2010 after many years of stagnation, there was a hope that more women might break through to the major leagues.

"One of the researchers looked into something called the ‘Bigelow effect’ when people felt, 'women are going to get hired' but there was no Bigelow effect, it just did not happen," Adrion stressed.

The film is occasionally punctuated by sobering statistics and then probes into the reasons (or ‘prongs’, as Adrion called them) behind the fact that only five women have ever been nominated for best director at the Oscars. Considering that women now account for around 50% of moviegoers, we continue to have dismal statistics: 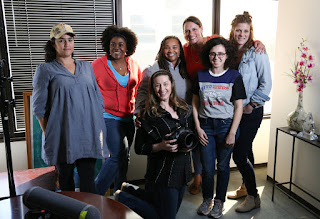 Despite many ‘cosmetic’ efforts to indicate that the industry may be becoming more inclusive, the percentages have not changed for over a decade. “There's some deep-seated issues of discomfort with women in leadership roles, period, that exists in corporate America, in politics and in film," Adrion stated.

The reality is that numbers have been stable since 1998. During the film the information flashes up on screen: - 50% of directing students are women, but only 25% of films featured at Sundance are from women.

The ‘who you know, not what you know’ culture of Hollywood, and the nature of the ‘men’s club’ mentality that still dominates the industry, means that there are also far fewer female film critics so that the perspective regarding which films and stories are ‘relevant’ or ‘valuable’ is skewed in favour of predominantly male stories and concerns.

However, Adrion herself felt that the answer to the problem is not all that complicated - "Fundamentally, the answer is simple - they just need to hire more women. The numbers could change next year if that commitment was made. Film is a little bit harder but in TV, you could say you want half of these episodes directed by women. There are a lot of executives who… don't want to be told to change." She also suggested that a great difference would be made if only high-profile actors agreed to use inclusion riders.

Half the Picture exposes just how determined a female director must be to be able to follow her passion. Twilight director Catherine Hardwicke says she questioned herself: "I thought it's me, I'm not good enough, I'm not working hard enough." Lena Dunham says she was "delusionally self-confident" as a form of "self-preservation" when she faced rejection. Sam Taylor-Johnson says it’s essential to "toughen up" to get work in the business, meanwhile Ava DuVernay speaks of creating an "armour". 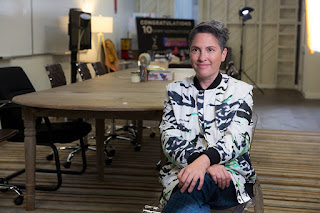 Jilly Soloway (creator of Amazon's Transparent) says “even if you don't feel it, you just have to pretend you're shameless… you need to push, push, push.' Some women are reluctant, they think: 'Who am I put myself out front?' It's a political act to do it because you're taking up the space you deserve in the world and other women see you do that and gain confidence from that."

Adrion highlighted the situation of director Lynn Shelton, (Humpday, Laggies, Your Sister's Sister) -"who's made five incredible independent films and been at Sundance and says that guys she did the festival circuit with… she's seen THEIR careers explode. Colin Trevorrow is the poster boy for that, he went from Safety Not Guaranteed to Jurassic World!”

It seems that many male directors start out on the festival circuit and then get the chance to make big-budget movies, but female directors find that they are almost never offered that kind of opportunity.

Even if a female director manages to get a huge hit, further offers don't come flooding in. Both Hardwicke and DuVernay say they thought more opportunities would come their way following the big hits Twilight and Selma, but it was not the case. Wayne's World director Penelope Spheeris jokes: "I think I'd have directed Wayne's World II had I been a dude… but that's cool, ‘cause it flopped!"

Often women have not been able to create a significant body of work to compare and compete with their male counterparts simply because they haven’t had access to the resources and opportunities that men have.

Adrion said: "For women, people of colour, and LGBTQ - we all need to look at our peers…and think is it reflective of society? It's not a crime if it's not, but we need to work harder to find… and hire those people." Even childcare issues are part of the problem, as female directors who have children bemoan the difficulty of working and having to spend time away from family.

Ava DuVernay is just one of many women in Hollywood who is putting her money where her mouth is - every episode of her show Queen of Sugar was directed by a woman.

The Q&A concluded with a question for Adrion which asked whether she felt that attitudes in the film industry might be changing, particularly post the Weinstein scandal?

"If there was a female counterpart of Harvey Weinstein, she would have had much less power…I think the conversation has changed. The Harvey Weinstein mess has been instructive, in that it has shone a light on a very dark part of the industry that exists because of the extreme gender inequality in our business. I have to be optimistic. The numbers are the numbers, you need to be realistic…but you keep making your work. What am I going to do? Just give up? I'm going to keep working and that's part of the change."

Watch Half the Picture at Picturehouse Central on Sunday 10th June - find out more and book tickets here.