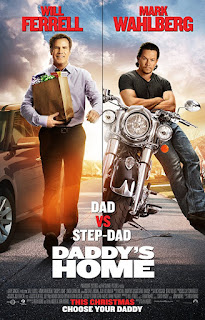 "Here's a question for you. What do kids need more, a father or a dad?" Kraig Taylor-Bryant watched Daddy's Home ...

So, with it being Father's Day last weekend, I thought I'd browse Netflix for a film relating to fathers, one that brought a strong message of what they mean to people. I didn’t find that, instead I found one that had a different message, but one that remains embroiled in my mind; that there is a difference between a father and a dad, and there doesn’t need to be a biological connection for them to be your dad.

It is a Will Ferrell comedy that helped me see this message, but strangely enough, I didn’t find it funny like a do with many other films that I've seen him in, like The Other Guys and Talladega Nights. There were a few moments in this film where I smirked, such as when Will Ferrell's character, Brad, ends up getting stuck in the wall, from the inside, after riding a bike outside (it just sounds ridiculous when you say it out loud), or when Brad's step son Dylan, turns out to want revenge on his fourth-grade bully (who turns out to be a girl) and remembers that his biological dad in the film, told him to "kick the bully in the nuts".

Anyway, the film starts out with us realising what a dad truly is, or what Will Ferrell’s character, Brad Whitaker, sees it as being. We get to witness all the things that this man does for his kids to prove himself to be a "dad" and not just a father. This all happens before we realise that these kids are not actually "his" biologically, it's kind of clear early on by the fact that they refer to him by his first name, showing that they clearly had some confusion growing up as to who their real father is and what he looks like, giving us a backstory of sorts from the beginning. It’s also evident that he desperately seeks their approval, but it's not clear he has it at the start, making us feel sorry for him early on. We've seen many films where there is an underdog that has to exceed expectations, but this is a film where we see the characters around him develop, through Brad. What's really interesting, is how this character influences Mark Wahlberg's character, and the kids’ biological father, Dusty.

When we first meet Dusty, it's at an airport where Brad goes to meet him, but Dusty pretends to not be with Brad and walks off anyway to find his ex-wife, making it clear that this is his goal of coming back to his kids, to get his family back. It's almost like a story where you can see both points of view, you could see Dusty as the hero, trying to win his family back, whilst also being a bit questionably manipulative, or he could simply be being kind depending on how you see it. But of course, the story wants you to believe that Brad is the main protagonist, and I do see him that way, because it's clear that he is the deserving dad, after seeing all the things that he does for these kids.

Surprisingly, Brad is very welcoming to Dusty and encourages him to see his kids, but Dusty continues to manipulate Brad by making him offer to let Dusty stay with them for a while. This leads to Dusty making Brad look like the bad guy constantly. As the film progresses however, he starts to respect Brad in a way, after Brad's wife Sara (played by Linda Cardellini), tells Dusty that he needs to earn the right to see his kids, which he tries to do. But he finds it incredibly stressful and difficult and, after struggling with the simple task of picking up his kids from school, he understands a small part of what Brad does to prove himself as a dad. This brings across this powerful notion that you don’t need to be biologically related to someone to be their dad, as long as you always put them before yourself and remind them that you care about them, then that shows that you are a real parent to them. Dusty seems to then develop a friendship of sorts with Brad, by defending him when confronted with Dylan's bullies' father who said that he wants to fight the "real dad". But Dusty defends Brad by saying that Brad is more of a real dad than anyone there, showing that he truly believes that Brad is a better dad than himself, leading Dusty to move in near to them and for them to be friendly neighbours, which is kind of weird when you think about it, but it's still nice. 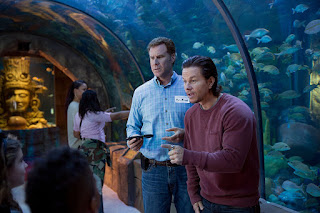 The kids also seem to develop around Brad, as they start to appreciate a having a step dad more as the film progresses. Sure, they do like having their real father around, but a lot of the time, Brad is the one that puts in the effort to arrange things for the kids to show them how much he cares about them, whereas with Dusty, it seems to be lucky coincidences and manipulation that seems to make the kids start to like him equally (if not more in the earlier parts of the film). Things like when he is reading the kids a bedtime story, he makes one up about a "step king" and make him out to be the villain of the film. And when Brad pays for the kids to go and see a basketball game, by pure coincidence, Dusty runs into a Basketball team manager of sorts that he clearly has a good relationship with, and ends up getting the kids, the closest seats to the game itself. I think this makes Dusty begin to think that parenting is easy, and it's just about knowing people that can get your kids a fun experience. But when he is actually put in the position to do everything that Brad would usually do, he can't even do one of the tasks. But anyway, as the film goes on, the kids start to like Brad more and more, as he starts throwing money at a lot of things to try and make the kids like him more. But after Brad embarrasses himself by getting drunk at the basketball game, because his family moved away from him, he ends up leaving to live in his office for a while, feeling as if he's lost his family, when he sees them sat together looking at Dusty and Sara’s old pictures. But I think it's after the kids see that Dusty isn't as good at being a parent as Brad, they start to appreciate him more, as I'm sure over the time that Brad was in the office, they could tell that their mum was struggling a lot without Brad, who would often do a lot around the house.

Sara also starts to gain an appreciation for both Brad and Dusty towards the end of the film, because of the fact that, at the end of the day, if one person can put themselves in the shoes of another, then they are way more likely to gain respect for them, like Dusty did. And Brad’s wife clearly has grown a respect for Dusty as well as Brad because she has realised that Brad’s belief is that if you see the best in everyone and try your best to find it, then you can (despite how difficult it was for Brad). This would make it a great influence for parents because it just shows that if they do put themselves in someone else's shoes, such as the step father of their kids, or the kids themselves, then you really have the potential to be the best dad you can be.

What Daddy’s Home also really shows though is that you don’t have to be the "cool dad" to be the best dad, and that you simply just have to be there for them and willing to do things for them to show that you care, that aren't just easy things that everyone can do. The film does this through showing Brad taking a lot of his time to make breakfast for his kids, or prepare their lunch, and simply reading them a bedtime story, and of course, taking them to school. Of course, he also does a number of other things including volunteering to help out the school that the kids go to, but that’s not something that everyone has to do, the point is that you just have to be the best dad for your kids, and this film does that in a great way.