Film - Dead in a Week (Or Your Money Back) 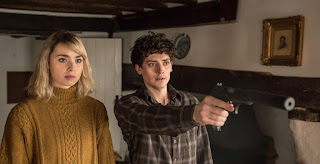 Susan Omand gets an offer she couldn't refuse and watches Dead in a Week (Or Your Money Back)...

A film about failed suicide doesn’t really sound like the best way to brighten your day but I got real feel-good, warm and fuzzy feelings from watching Dead in a Week (Or Your Money Back).

William Morrison (Aneurin Barnard), failed author and erstwhile life-guard at the local leisure centre, has tried to kill himself 7 times (10 if you count the “cries for help”) and he’s a bit rubbish at it. His gas got cut off as he was trying to suffocate himself by sticking his head in the oven, he pulled the light fitting out of the ceiling trying to hang himself and dropping the toaster into a bath to electrocute himself just resulted in blowing all the fuses in his flat. We first meet William as he’s standing on the wrong side of the guard rail on a bridge over the river. This is where he also meets an unassuming looking man called Leslie (Tom Wilkinson) who talks to him for a while, offers to help and then hands him a business card just before William throws himself off the bridge… unsuccessfully of course. By the way, just how it went wrong this time is laugh out loud funny. Anyway, back home, and much disgruntled, William fishes Leslie’s business card out of his pocket and gives him a call. You see, Leslie is a 65-year-old assassin for hire and, for a fee, he will take the business of killing yourself out of your own hands. They meet up and agree a contract, guaranteed to happen within 7 days, for a “quick and painless” death, because William can’t afford the “hero’s death” he wanted from Leslie’s brochure of options (that being to get hit by a truck while saving a child). However, William’s outlook changes when he’s contacted by a publisher who has read one of his many manuscript submissions and, because of this,  William meets the girl of his dreams – publisher's assistant Ellie (Freya Mavor). He wants to call off the hit but the contract with Leslie is non-refundable and, if Leslie doesn’t fulfil this job, he will miss his quota of kills for the month and end up getting struck off from the Guild of Assassins…

For my “random pick” film of EIFF, this turned out to be a fantastic find. Beautifully shot (pardon the pun) the dialogue was humorous without being jokey and the characters were wonderfully observed with lots of detail adding to the richness. The film allowed us to follow the stories of both William and Leslie as their surreal, and yet marvellously mundane, scenario played out and, as main characters, they are portrayed with multi-faceted individual depth as well as a sparky on-screen chemistry when together. Ellie too, as the publishing assistant and centre of William’s affections, is a character lifted above the normal “love interest” expectations by Freya Mavor’s acting. But, for me, it was another two characters that stole the scenes they were in. Leslie’s wife, Penny (played by Marion Bailey) injects such an air of normality into Leslie’s suburban home-life. She agonises over embroidery contests for the county show, they play bridge of an evening with the vicar and dote over their budgies, so it makes it even funnier when you realise that she knows exactly what Leslie does for a living as she’s trying to plan their round the world retirement cruise. The other stand-out for me was Christopher Eccleston as Harvey, the head of the Guild of Assassins. Imagine your stereotypical Ray Winstone style London Gangster-type then multiply it by 100 and sit him behind an office desk. Eccleston overplays the role to the point of parody but it’s perfect for this film. His final discussion with Leslie at the dining table of Leslie’s home, with a clock sitting in the middle of the table, is hilarious.

Add in a beautifully ironic, and highly satisfying, finale and the marvel of the intricacy of the end credits and I left the cinema with a spring in my step and a huge smile on my face. If you get the chance to see it, whether or not you think you will empathise with the situations that William and Leslie find themselves in, please watch Dead in a Week. You won’t need to ask for your money back.