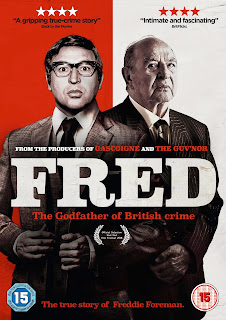 Our own London kingpin Tony Cross watched Fred: Godfather of British Crime, out now on DVD from Lionsgate UK...

Former London gangster Freddie Foreman is nearing the end of his life. A heavyweight villain with an unbelievably bloody past, Freddie is the last living legend of the Krays’ London underworld. A ruthless criminal, still feared and revered to this day. Freddie now lives in a retirement home: alone with only the memories of his former crimes to look back on.

With strained family relations and increasing health issues, Freddie finally tells all and revisits his old haunts in an attempt to understand what pushed him towards a life of crime. From his impoverished childhood, to traumatic memories of the Blitz and WWII, Freddie is a fascinating character study. Can a man accused of over forty murders, known as the Godfather of London, really find redemption?

What is our fascination with gangsters? Is it the myths that we’ve grown to accept about their codes of honour? Is it the power of fear? Whatever it is we’re never going to stop telling their stories. Except we never hear the stories of their wives and children. And that is what I missed from this film.

Gangsters never seem to have doubts. They never seem to regret and despite the best efforts of director Paul van Carter he can’t draw Freddie Foreman to admit he does. Or that anything he did was traumatic. Foreman comes back again and again to an incident in World War Two that seems to have given him nightmares but never admits that anything he did after that weighs on him at all. He regrets getting involved with the Kray Twins, but he doesn’t seem to be too upset about anything else he may (or may not) have done.

The film also is vaguely amusing as the past Foreman admits to things that he’s unwilling to admit to now as the laws on double jeopardy have changed. He treats the camera and questions like it’s a police interview. He’ll go to a certain point but no further. Whether he’s a murderer or not (and he’s admitted to two murders in the past and the suggestion is that he was responsible for more) isn’t something he’s going to cough up without a fight.

The film tries to tell the story of Fred’s life, how he ended up a criminal and through his career in (and out of) crime. The suggestion is that poverty and lack of education gave him no choice but to become a criminal, but the truth is a lot of people are bought up in those circumstances but most of them don’t end up killing people. Despite that I think there’s an element of truth that lack of education limited his opportunities. He certainly seems capable of running a legitimate business empire. And in another fairer (?) world he might have been able to do that. I’m not sure any of this excuses his life. Foreman constantly makes the point that he was doing this for his family, but we never hear their side of things. His wife is dead. Hers is a story I want to hear told. 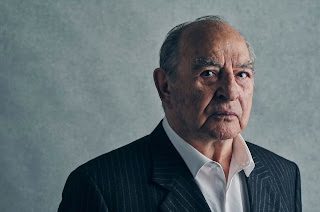 Foreman is 85 now. He seems to have lost touch with his children, one of whom is actor Jamie Foreman. And I don’t know whether Paul van Carter is deliberately trying to show us that Foreman’s life has ended in failure or not. You do wonder what would have happened if Foreman had gone straight when the chance arrived, but I suspect the lure of power and wealth must have been too much. I also found myself wondering what it must be like to be feared. How does it feel when you walk into a pub and everyone takes a little breath and tries not to attract your attention? Is that a good feeling? Or does it wear away your soul a little bit each time?

And that’s what I found with this film. It asks questions that never get satisfactorily answered. It asks the wrong people those questions and ends up raising more questions than it answers. Foreman never really seems to open up, although there are moments when you think he might, but then he wriggles away. We hear about codes of behaviour, but as one of the talking heads says the codes of honour are just the way people justify terrible acts.

It’s an interesting film but ultimately a little unsatisfactory. I ended up wanting something that I could never get: an open and honest confession.