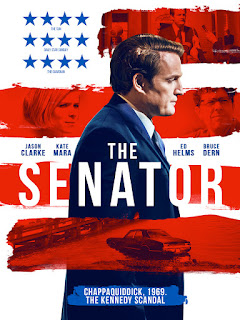 Coming to UK Digital HD and DVD in August, thanks to Signature Entertainment, an engrossing political thriller inspired by true events - The Senator...

On July 18, 1969, Sen. Ted Kennedy drives his car off of a bridge on Massachusetts' Chappaquiddick Island. The accident results in the death of passenger Mary Jo Kopechne, a 28-year-old campaign strategist who worked for Kennedy. The ongoing investigation into the mysterious and scandalous events forever alters his political legacy - and ultimately changes the course of presidential history.

Directed by John Curran and starring Jason Clarke at Senator Ted Kennedy, alongside Ed Helms, Jim Gaffigan, Kate Mara and featuring Bruce Dern as Joe Kennedy Sr, the film has had an acclaimed cinema release in the US under the title Chappaquiddick but this will be the first time the film is available in the UK when it is released on Digital HD on 13th August with the DVD following a week later on 20th August.

Watch the trailer below