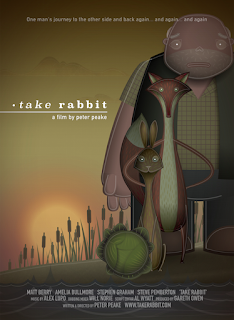 We love short films here at The DreamCage so, as part of our Edinburgh International Film Festival coverage, we are watching some of the short animations that are up for the McLaren Award. Today Susan Omand watches Take Rabbit by Peter Peake...

Based on an age old conundrum, a man attempts to transport some unlikely passengers across a river in his tiny boat but soon realises he’s taken on more than he bargained for.

I’m sure you know the riddle about a man who has to get a fox, a rabbit and a cabbage over a river in a boat that can only carry one passenger besides himself. The fox can’t be left alone with the rabbit, nor the rabbit with the cabbage, so how does he get all three across the river? That’s the set up at the start of this lovely little animation, featuring the voice talents of Steve Pemberton as the man in the boat with Matt Berry as the Fox, Amelia Bullmore as the Rabbit and the wonderful Stephen Graham as the Cabbage. What? As the film itself says, why are you surprised that the cabbage talks when you’ve been listening to a talking fox and rabbit without batting an eyelid? Yes, there’s a talking cabbage, get over it.

The first thing I have to comment on is the art style of the animation, it is beautiful! The highly stylised shapes, colours and textures are amazing, the waves and sunshine so atmospheric and I love the way that everything is lined out just inside the edges. The movement too is superb and I wanted to reach out and stroke the billowing fox tail, of which Mr Fox also seems justifiably proud. Talking of whom, the personalities of all the boat’s passengers are very engaging. Think of the Creature Comforts animals by Aardman, where it’s “real” voices talking, and you have the idea. The dialogue too is cleverly done, with a lot of humour and a very neat twist or two that lifted the story above the expected. I laughed out loud at several of the quips, including the one by the Fox along the lines of “no-one’s that bad AND ginger, that’d be ridiculous!” If it was up to me though, I would have cut the final scene with the two doors altogether as this introduced too many new ideas for me and I believe it would have been a more powerful ending to the film to leave it as a single cohesive premise with a poignant end.

Otherwise though it’s a wonderful little animation that made me want to know more about the backstories of all the characters as their chemistry worked so well. Oh, and the name of the boat –that's genius.

The McLaren Award nominated films are being screened at EIFF on 27th and 28th June. Find out more and buy tickets HERE.