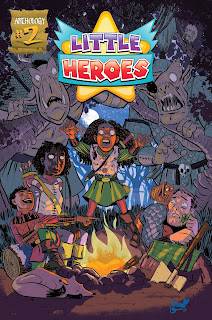 Little Heroes Comics are currently running a Kickstarter to fund the creation of their second charity fund-raising comics anthology. Susan Omand was lucky enough to get a sneak peek at the new collection, here’s what she thought...

When I reviewed the True Believers anthology Tales from Beyond Infinity last week, I mentioned that charity anthologies are a fantastic way of re-connecting with comics favourites and discovering new comics creators while, at the same time, raising money for a good cause. This collection, from Little Heroes Comics, is no exception although, this time, for me, there were a lot more new names that I hadn’t read before. Following on from LHCs first anthology, on the subject of Strength, the theme for #2 is all about Family and there are thirteen different comics to read, as well as an excellent and informative comics drawing tutorial from Lorenzo from the famous Etherington Brothers.

Now, I realise that I am not the ideal demographic to read anything family orientated but even I found lots to like in the stories contained herein. They are all very child friendly tales, some funny, some quite sad, but all with a message about the importance of family imparted in new and interesting ways. The unconditional love, protection and support from parents features strongly in the stories. I enjoyed Gallant and Amos by Rob Barnes, which touched on the classic feeling of having done something bad or hurtful, you feel that you won’t be welcomed back home and how hard it is to make the move to return. And The Mountain Wolf by Tom Roberts was a very good story to highlight the fact that there are two sides to every situation and sometimes things are not as scary as they seem. Reading through some of the other comics in the anthology, it sunk in that family doesn’t always mean just blood relatives either. Friends are just as important to have around, as the story Hot Lava Monster by Eddy Hedington with art by Fares Zoghlami shows. And, sometimes, it is the caring of someone you don’t even know that well, like the hospital doctor in The Cov Kids story by Nick Shingler, that can make all the difference.

But I have two absolute favourites from the stories in this anthology. The one that made me laugh out loud the most was Oh God by Stu Perrins, whose work I enjoy anyway, with art by Tom Curry. I won’t spoil the story for you, so you’re going to have to find it for yourself. However, I will say that it’s a very simple idea executed so brilliantly and unexpectedly, with the perfect set up and execution both in terms of dialogue and artwork, that I couldn’t fault it. The other story that I really liked is Mandy the Monster Hunter in The Crocodile in the Carpet. Written by Matt Warner, from a concept by him and Mark Adams, with art by Lyndon White and very effective lettering by Nikki Foxrobot, this is not a funny comic, nor is it meant to be. It deals with the work of the grief counsellor in helping a child and his mother cope with his grief over losing his father. Warner does not shy away from the trauma felt but it is handled incredibly sensitively from all viewpoints, with nobody real made out to be “the bad guy” but also showing that it takes work and involvement from all in order to overcome the monsters that have manifested. Lyndon White’s art style really suits the subject, with an ink and watercolour look making the story feel less cartoony and treating it with respect; I also loved the fact that the monster crocodile had blank eyes – that is very telling. If for no other reason, you need to buy this anthology to read this comic. 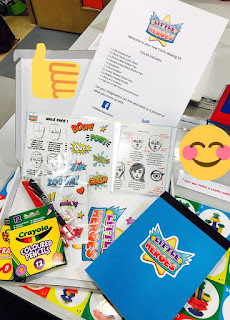 But there is another reason to buy this anthology - as I said at the start, this is being done for charity and it is raising money for an amazing cause. Little Heroes Comics is a UK based charity that creates and distributes comic making kits to children through hospitals and healthcare organisations across the UK.

The charity started in March 2017 when its founder Aaron Rackley wanted to give back to the hospital that helped him during his own time battling cancer in late 2013. He set up a JustGiving account and set a target of £1000 with a plan to create 100 comic making kits to give out to sick children in hospital.

Each kit contains everything that a kid would need to make their own comic book. There’s drawing pencils with an eraser and a sharpener, marker pens, crayons and coloured pencils. There’s plain paper, a blank panel pad and comics related stickers. There’s even four helpful “how to” drawing guides so all each child needs to add is their own imagination.

The support and the feedback from not just the medical field but also the comic book community was so great that Aaron decided to form the charity officially and set out to find funding to create more.

And here's where you come in.

Little Heroes Comics is currently Kickstarting this second comics anthology in a bid to raise money to create more of these amazing kits. As always there are plenty of perks on offer. In addition to pre-ordering your own copy of the anthology, which will be available in digital and print formats, you can opt for membership of a special club that gets you a sew-on patch and exclusive members card. There’s also the opportunity to catch up with the first issue of the anthology and to take part in a vote that will see one winner (picked at random from backers) see their own family pitched against a family of either super-heroes or super-villains on a very special variant front cover of the new anthology! But, the best perk of all is the feel-good factor that you get from donating some of these superb comics-making kits and brightening everyone’s day. Find out more on the Little Heroes comics website and support the kickstarter here.