Comic - Tales from Beyond Infinity 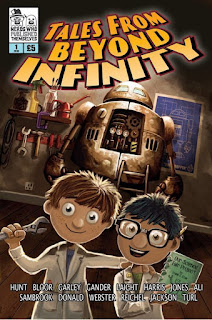 Susan Omand heads to infinity and beyond, well, kind of, as she reads Tales from Beyond Infinity, the charity comics anthology from True Believers Comic Festival...

We are big supporters of the True Believers Comic Festival here at The DreamCage, indeed our own Defective Inspector has reported back from the event itself on a few occasions, so when we heard that their Charity comic, sold in aid of the Sue Ryder Leckhampton Court Hospice, is now available to buy online, we had to give it a look.

It says a lot about a comics collection that I got excited about it just by reading the Contents page. Not only are there TEN different comics to wrap your eyes around (well, nine and a “comic without pictures” or, what I call, "article" from the anthology editor Stuart Mulrain himself) all for just £5 to buy (£6.50 including postage). Bargain! There is also a great mix in this collection of some of my favourite comics creators (Madius Comics and Mike Garley to name but two) and much loved characters (Griff Gristle!) alongside creators that I wasn’t familiar with so is a really good way to get a taster of some of the superb talent out there and maybe discover something new. Before I move on, a quick YAY to see that Letterers get listed in the contents page too – it’s a much unheralded skill and needs more bigging up in the comics industry imho.

Anyway, onwards and, only just resisting the temptation to jump straight to the Griff Gristle story (did I mention there was a Griff Gristle story? There is) I decided to read the comics in the order they were presented to me in the Anthology. 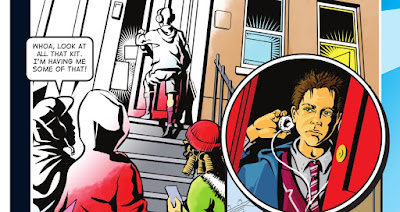 The Curious Tale of An Anorak Kid by Stuart Jackson and Leon Reichel is up first. This is a satisfying little tale of troublemaking kids from a local housing estate who decide to gang up on “the posh kid” from school (you can tell that he’s posh, he’s wearing shorts to school) but things don’t go quite as they plan. As well as the clever and unexpected ending, which really made me smile, the thing that caught my eye with this comic was the evolution of the artwork, going from draft pencils in the first few panels, through the black and white ink stage and bright colour flats before a beautifully executed full page finale that would work really well as a pin-up.

Next we get a Samurai Slasher story from Mike Garley (with art by Michael Lee-Graham and lettering from Mike Stock). I really enjoy Mike Garley’s comics and have reviewed The Kill Screen on here before so I was looking forward to this one and it doesn’t disappoint. Starting with a nod to a very famous six word novel and ending in supremely violent mayhem, this story is hilarious fun. The “greyscale plus red” (lots and lots of red) colour scheme worked brilliantly and the expressions in the faces are priceless.

Practice Makes Perfect comes next. I hadn’t heard of Jon Laight or Dan Harris before (sorry if I should have) but, since the remarkable Rob Jones did the lettering for them on this, I reckoned it’s got to be good… and it was! The Brethren Born characters were very engaging, the artwork perfect for the story and the humour was laugh out loud funny. I will be seeking out more from these guys.

You know the saying about having an angel on one shoulder and a devil on the other? That’s kind of the premise of the next story - The Wages of Sindy by Craig Turl. However, Sindy is just a kid and her angel and devil are pretty much the same size as her. Add in the fact that the devil is a sarcastic bugger and the angel has a penchant for beer and you get the general idea. The comic itself has a very Calvin & Hobbes feel about it and I can see the main characters working well in a serialised strip. 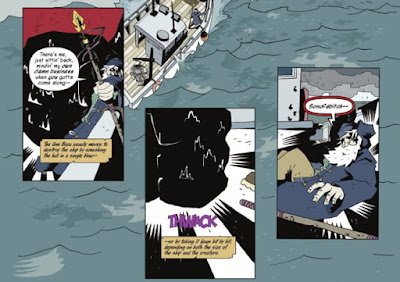 And now (after a few words from their sponsors) … it’s Gristle time! (That maybe sounded better in my head.) I have been a huuuge fan of Madius Comics sea-faring creation since he started (you can read my reviews here and here of the first 2 comics) so must admit to being very excited (in case you hadn’t realised) to find a Griff story I didn’t know about. Thankfully, it lived up to my expectations, and more, as Griff and his trusty sidekick Justine have to escape the clutches of the legendary Umi Bozo, a Sea Monk. The Jones and Sambrook standalone story is everything that a Griff-fan like me wants, with sea lore, magic, intrigue and very bad puns. And Rory Donald’s art is perfect as always – I really love the muted colour palette he always chooses and his bold use of black in his panels is simply spectacular. It’s all gloriously Gristle-y goodness.

A complete change of pace next with Perrywinkle from Susie Gander, another comics creator that I don’t know that much about. I’ll be honest, it took a couple of reads to “get” the idea of this one, maybe because I didn’t know the character of Perry beforehand or because I was expecting another “funny” after the run of previous stories in the collection. However, get there I did and it’s a cool little story with an important take-home. I must say too that I love Susie’s character art – the use of the periwinkle colour was very clever and it’s refreshing to see individualistic, stylish and realistically shaped women in comics for a change!

From a grounded reality to Unfamiliar Skies, the name of the next comic from Sam Webster, and a story called The Immortal’s Curse. And be warned, this is a sad one. It hits the right level of pathos and leaves you questioning your own actions. I’m sure, if I (ironically) knew the Unfamiliar Skies franchise better, it may well have meant even more.

From the sublime to the ridiculous again, but in a good way, and the silliness of the Red Mask from Mars from Vincent Hunt and Shaun Dobie. Full of comic-y noises like Sskreeeeech!!, Boosh!, OOF! and, of course, BOOOOM! it’s weird, it’s violent and it’s very very funny.

Last up in the panel stories is a single pager Midnight Man story from Mo Ali and Andy Bloor and the artwork is just stunning! I love love LOVE the woodcut print effect and deco lines. Any one of these panels would easily make a t-shirt or poster and the layout, having the panels overlap slightly and not always reading left to right gives an interesting flow and dynamic to the story. Another comic that I’m going to have to seek out more of, I think.

The anthology rounds off, as I said at the start, with a “comic without pictures,” in other words, a fascinating “behind the scenes” style article by Stuart Mulrain, which looks back over 30 years of Superman adventures on BBC radio with a little help from audio guru Dirk Maggs. Surprisingly it fits in well to have a serious article about a blockbuster superhero at the end of a collection of work from indie comic creators because, like the True Believers Comic Festival itself, it shows that any kind of comic fandom is okay, you can like whatever you like, and nothing is better than anything else, it’s just different and that’s allowed.

So, there’s really no excuse. Grab yourself a copy of Tales from Beyond Infinity. You’ll get a comics collection that you can dip into again and again, enjoying some old favourites and discovering some new ones. PLUS you’ll get the feel good factor of knowing that your money, and all the creators’ hard work in making this anthology, translates into help for a very worthy cause indeed.

Buy TALES FROM BEYOND INFINITY on the TRUE BELIEVERS COMIC FESTIVAL website.