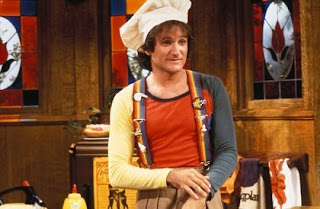 Now available as a complete DVD boxset, a reminder of Susan Omand's report to Orson on the genius that was Mork & Mindy...


“Sunday, Monday, Happy Days” Yes I’m of an age where I grew up watching the comedy based in 1950’s Milwaukee – back when Ron Howard hadn’t yet picked up his director's hat and was still just high school kid, Richie Cunningham, and when Fonzie was the epitome of cool.

In one episode of Happy Days, in 1978, an alien in a red jumpsuit lands in Al’s diner, with the mission of studying human behaviour and intent on taking Richie Cunningham back to his home planet Ork as a typical specimen, only to be foiled by Fonzie. That alien was Mork, played by the then unknown Robin Williams, and that one episode of Happy Days was so successful that it spawned the spin off series Mork and Mindy.

In the new show, Mork (Robin Williams) arrives back in 1980’s Boulder, Colorado, in an egg-shaped spacecraft, still with the trademark red jumpsuit. He had again been assigned to observe human behaviour by Orson, his mostly unseen and long-suffering superior who has in fact sent him to get him off Ork, where humour is not permitted. He meets Mindy (Pam Dawber) who is upset after an argument with her boyfriend, and tries to help. When Mindy notices his backwards suit, he was trying to blend in with the local customs, she asks who he really is, and he innocently tells her the truth. She promises to keep his identity a secret and allows him to move into her attic. Storylines usually revolved around Mork's attempts to understand human behaviour and American culture as Mindy helps him to adjust to life on Earth, usually ending up frustrating her and annoying her friends, as Mork can only do things according to Ork customs. At the end of each episode, Mork reported telepathically back to Orson on what he has learned about Earth and it was these end-of-show dialogues which allowed Mork to comment on how society worked, with a lot of humour and great insight.

The show ran for 4 seasons, although its popularity waned after the first 2 due to changes in format and timeslots in America. However it was the launchpad for Robin Williams, first as a stand up comedian, then as a film actor and the rest, as they say is history.

To me though, he will always be the alien in the red jumpsuit, causing chaos and confusion with his slapstick humour but always with a childlike innocence, shrewd observations and pathos, picking out the truth behind the facade.