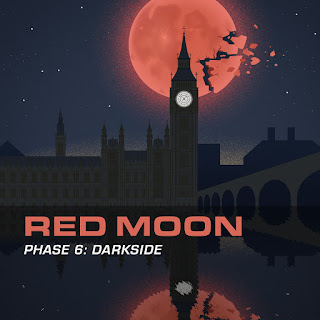 Susan Omand turns her eyes to the skies and listens to the final episode of the alt-history thriller from Wireless Theatre Company, Red Moon, Phase 6: Dark Side...

“She was just too good at her job…”

A woozy Eddie Sloper tries to keep control of his senses as he is drugged and questioned after being captured breaking in to the American Base that forms the UK control centre of Space Command. Frustrated by his lack of cooperation, his questioners leave him but he is not alone as a voice from the past visits him to try to talk him out of his drowsiness and get him to act. His reverie is disturbed though as the sinister Mrs Jones comes to collect him and take him to meet the base commander. However, his function this time is not to answer questions but to act as bait…

After a slight dip in episode 5, I had high hopes for the final episode of this excellent audio drama, and I was not disappointed this time! As a climax to the series, this episode really pulled the story back to its best and it contained everything I wanted – there was action, suspense and a good bad guy who, true to form, explains the whole evil plan to his prisoners prior to its execution and a great twist to the exit strategy. The dialogue too, especially between Sloper and Madison, was back to being much more engrossing than the previous episode and kept up the levels of urgency. This suspense and engagement started by the strong writing and exceptional acting was augmented a lot by the excellent editing and sound design throughout the episode, by Malcolm Thorpe, best appreciated through headphones to really pull you into the story rather than just listen to it. While we’re looking at how it sounded, I also need to mention the theme music by Francesco Quadraruopolo, which set the tone for the whole series and gave it that wonderful action/adventure movie feel.

The alt-history aspect, which I felt was missing from Episode Five, really came through again in the writing of this episode, by Robert Valentine, not only because of the talk of the nuclear bases on the moon but little throwaway comments, like the Monorail on London’s Regent Street, grounded the story and made it more believable. Talking of incidental remarks, I noted a lovely nod to Production Designer Ken Adam too – he was responsible for the sets in a lot of the early Bond films – which helped me visualise the style of the “bad guy’s lair” looked in this drama too and just added to the Bond-ness of the episode.

However, it also fell a bit into the Bond cliché trap with the progress of the plot, especially the schmaltzy epilogue, but that can be forgiven because of the fun of the rest of the story. I am actually surprised, and a little disappointed, that they tidied all the loose ends up so well, even though it led to a very satisfying ending, because I felt it left no real room for a sequel and I would have liked to hope that we would get more stories starring Eddie Sloper. As a one off though, this is a fun spy thriller and is definitely one to be recommended, especially for a binge-listen of all six episodes at once.

You can stream Phase I of Red Moon FREE on the Wireless Theatre Company website where you can also buy Episode Six for only £1.49 along with the rest of the episodes from the series.