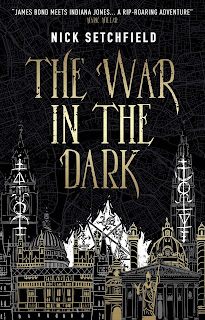 We're happy to be part of the book tour for The War in the Dark, the debut novel by Nick Setchfield which is published today by Titan Books. Read a short extract from the book below...

Read Steve's review of The War in the Dark here

Christopher Winter had never put a bullet in the head of a priest before. The idea felt faintly blasphemous. He smiled in the half-light. It was the kind of morbid little thought that came to him on these occasions. Sometimes it felt like a ghost trace of conscience. He let it go.

He was a tall man in his forties, lean as fuse wire, his black curls cropped close to the skull, military fashion. His face was nearly as unexceptional as he needed it to be. Only his eyes betrayed him, startlingly green in the London dusk. The lids were hooded, as if trying to conceal the remarkable irises.

It was almost evening. Clouds the colour of ash occupied the sky. Winter waited in the doorway of Kingsland Edwardian Butchers, inhaling a ripe tang of meat and sawdust as he watched the Portobello Road.

Tables filled the street. There were stalls of silverware and bric-a-brac, lamps and decanters, apples and pocket-watches. A sudden gust scattered a sheaf of antique maps. They blew into the gutter, their edges claimed by petrol spills.

No sign of Hatherly, his echo man. Not that Winter was meant to see him, of course. Hatherly was entrusted to be invisible, only revealing his presence if things turned ugly. Once a child’s nanny had caught a ricochet and lay pooling bright, innocent blood on a marble floor in Mayfair. Hatherly had broken cover and taken a bullet in the sternum for his trouble, shot by the same Soviet sniper that had just eliminated a defector. An operational failure, the memorandum had stated. The girl had died two days later.

Winter wanted to spot him, just as a matter of professional pride. It was good practice. He let his Woodbine flare and die. The streetlamps were on now, their sodium glow exposing a fine rain. Winter buttoned his houndstooth coat and retrieved a pair of driving gloves from its pockets. The lambskin strained over his lean fingers and prominent knuckles. He could feel the dull weight of his Webley & Scott .25 against his heart.

It was time to kill Father Costigan.

As he walked he lit another cigarette and recalled Faulkner’s briefing. The SIS had kept tabs on Costigan for a while now. Given his position his communist sympathies naturally attracted attention. It wasn’t unusual for such men to fall hard for leftist rhetoric – priests often fancied themselves as social reformers – but it was always noted, and never favourably. No one wanted Marxism disseminated under cover of whist drives and evensong.

And then his name had surfaced in Soviet radio traffic. The British monitoring station in Vienna had snagged it, flashed it home. The clergyman was trading secrets with the enemy. Just how the priest of a shabby little church in Notting Hill had access to the finer particulars of British intelligence was a detail Faulkner had chosen not to share.

Winter had no idea what information was bleeding to Moscow. He knew only what he needed to: Costigan had leaked material of national importance. That was enough. His superiors knew more, of course, but secrets built the hierarchy, polished the mirror-maze.

Thank you again to Nick Setchfield and Titan Books for allowing us to share this extract. The War in the Dark is published TODAY.