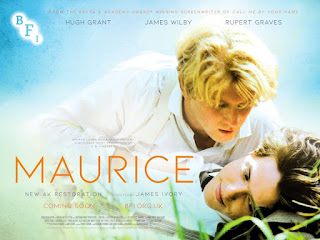 Press Release from the BFI

Originally released in 1987, 30 years before the James Ivory-scripted 2017 smash hit Call Me by Your Name, Maurice is a landmark film, as important as any in the history of gay cinema. One of the most respected and popular mainstream gay-themed films of its day, it still has hugely broad appeal in its moving portrayal of the agony and ecstasy of first love and made stars of its young cast Hugh Grant, James Wilby and Rupert Graves.

Written by E.M. Forster in 1914, Maurice was the second of his novels to be adapted by Merchant Ivory (following 1986’s A Room with a View and ahead of Howards End in 1992). First published in 1971, a year after Forster's death, the novel takes on a subject that no major bildungsroman (or, loosely, “coming of age novel”) in the genre had ever addressed: the problem of coming of age as a homosexual in a restrictive society. Starring James Wilby (Maurice) and Hugh Grant (Clive) as two Cambridge undergraduates who fall in love, the film Maurice is set amidst the hypocritical homoerotic subculture of the English university in Forster's time. In an environment in which any reference to "the unspeakable vice of the Greeks" is omitted, and any overture toward a physical relationship between men might be punishable by law, Maurice and Clive struggle to come to terms with their own feelings towards each other and towards a repressive community.

Maurice was co-written for the screen by director James Ivory and first-time feature writer Kit Hesketh-Harvey (marking a rare instance that Ivory did not collaborate with his usual writing partner Ruth Prawer Jhabvala). Hesketh-Harvey, who is best known as a musical performer, composer and translator, was a Cambridge graduate and thus familiar with the novel's milieu. Jhabvala did, however, look at the script and make suggestions, including the addition of a more convincing reason for the character Clive's sudden decision to live his life exclusively as a heterosexual.

Maurice was shot on location largely in the halls and quadrangles of King's College, Cambridge (including stunning interiors in the college's world famous Gothic chapel), where Forster was educated and later returned as a Fellow. The other interiors were primarily shot at Wilbury Park, an early Palladian house in Wilshire. Called Pendersleigh in the film, this setting is where Maurice visits his friend Clive; and here he later meets the under-gamekeeper Alec Scudder played by Rupert Graves. 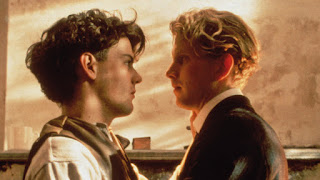 Under Ivory's direction, James Wilby infuses his character with a quiet sensitivity and an underlying sense of desperation to create a person who, as Forster wrote, has "an ingredient that puzzles him, wakes him up, torments him and finally saves him." Hugh Grant plays Clive with a blend of English public school arrogance and intimate vulnerability that attracts, and then nearly destroys, Maurice. The film had its world premiere at the Venice Film Festival in 1987 (during the height of the AIDS crisis), where James Ivory was awarded a Silver Lion as Best Director, sharing the prize with Italian filmmaker Ermanno Olmi for his film Long Live the Lady! James Wilby and Hugh Grant were jointly awarded Best Actor, and composer Richard Robbins received the Golden Osella prize for his score.

In celebration of its 30th Anniversary in 2017, Cohen Media Group brought Maurice back to the big screen in a brand new 4K scan and restoration from the original camera negative and magnetic soundtrack, held at the archive of the George Eastman Museum, and featuring a new 5.1 audio mix from the stereo 35mm mags, all approved by director James Ivory.

Ivory said of its re-release, "Our film Maurice remains today what it was when first released in 1987: the only openly mainstream male romance with a happy ending (except for maybe the recent God’s Own Country). This is why it has endured and is so loved by a generation yet to achieve all the goals of inclusion that have occurred since in most advanced countries — such as same sex marriage.

Many of the film’s admirers have waited for this reappearance of the film, which vanished from theatres in Britain a long time ago. I’m as thankful to the BFI for bringing it back as its fans are — maybe more, because I can now see it myself as it was meant to be seen, on a big screen, in a perfect restoration."

Thirty years on, Maurice remains a wonderfully mounted and outstandingly acted period drama, its themes of repression, dignity, compromise and love in the face of persecution are still as relevant today as they were in the 1980s and, indeed, as they were when E.M. Forster penned his novel more than a century ago.