Book - An Image of Africa 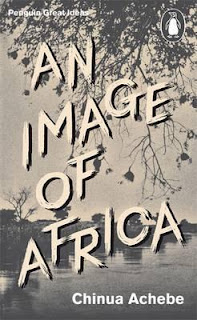 Tony Cross takes on controversy as he reads An Image of Africa by Chinua Achebe...

Beautifully written yet highly controversial, An Image of Africa asserts Achebe's belief in Joseph Conrad as a 'bloody racist' and his conviction that Conrad's novel Heart of Darkness only serves to perpetuate damaging stereotypes of black people. Also included is The Trouble with Nigeria, Achebe's searing outpouring of his frustrations with his country.

This small book (87 pages) comprises of two parts. The first is Achebe's essay 'An Image of Africa: Racism in Conrad's Heart of Darkness' and the second is 'The Trouble with Nigeria', which is a polemic on...well...the trouble with Nigeria.

The essay is fascinating. I read Heart of Darkness some time ago and I'd always assumed it was meant to be a dark satire on European colonialism, but Achebe gives that theory a polite spanking. He also uses the essay to point out the general European attitude to Africa (and Africans):

"Quite simply it is the desire - one might indeed say the need - in Western psychology to set Africa up as a foil to Europe, as a place of negations at once remote and vaguely familiar, in comparison with which Europe's own state of spiritual grace will be manifest."

Well worth a read.

'The Trouble with Nigeria' at first appears more time/place specific. Dealing with Achebe's criticisms of his home country in the early 80's. It was published in 1983. However, there are chunks of it that - to me - had a horrid contemporary resonance to Britain here and now. A Brexit Britain.

"Why do the good among us seem so helpless while the worst are full of vile energy?"

"A true patriot will always demand the highest stands of his country and accept nothing but the best for and from his people. He will be outspoken in condemnation of their short-comings without giving way to superiority, despair or cynicism. That is my idea of a patriot."

And perhaps the best:

"And this is not made any easier by the fact that no matter how badly a country may be run there will always be some people whose personal, selfish interests are, in the short term at least, well served by the mismanagement and the social inequalities. Naturally they will be extremely loud in their adulation of the country and its system and will be anxious to pass themselves off as patriots and to vilify those who disagree with them as trouble-makers or even traitors. But doomed is the nation which permits such people to define patriotism for it."

But read it as a fine example of good political writing - although he does go on about Nigerian driving a bit much (even if it is being used to make a point about indiscipline.)