Book - 'Kill all the Gentlemen' 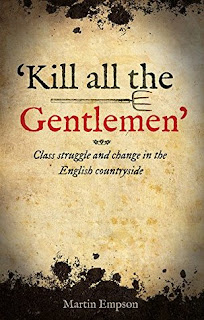 The peasants have always been revolting. Tony Cross read Kill all the Gentlemen': Class struggle and change in the English countryside by Martin Empson...

The modern countryside is the result of centuries of environmental change, but also brutal class struggle. While Wat Tyler's Peasants' Revolt is well known, and Jack Cade and Robert Kett are remembered for their rebellions, there are countless lesser known struggles. Modern agriculture, the food we eat and how it is produced, is a direct result of these historic struggles. Martin Empson's new book rescues these forgotten moments of history and places them in the context of the political and economic changes that have taken place over the last 700 years.

Well, I enjoyed this.

Martin Empson has done an excellent job of guiding us through what the subtitle of this book outlines: Class struggle and change in the English countryside. He begins with the Peasant's Revolt of 1391 and end with the issues facing rural Britain (and agriculture worldwide) in the Afterword.

Each Chapter covers a different era: sometimes focusing on an event and sometimes on a longer-term series of events. These aren't incredibly in-depth studies, but they do a fine job of introducing them in such a way that should you want to find out more about 'Captain Swing' you can. It's not dry academic history but history that reminds us of a past we have forgotten - or been made to forget.

Indeed, this book fits into an unconscious thread that has developed in my reading between books that aren't linked. This book alongside Dr Fern Riddell's 'Death in Ten Minutes' and David Olusoga's 'The World's War' are as much about what we have forgotten from our history as they are about their specific subjects. Empson also notes how some parts of this history - for example The Tolpuddle Martyrs - we chose to mark but others choose to forget. History is as much about giving a voice to the forgotten as it is an academic subject.

We are easily persuaded that Britain has gently wandered its way from feudalism to parliamentary democracy when the reality is that our history is one of constant riots and risings. Empson does a fine job of telling that story. The story of how the rural workers have been constantly betrayed by their rulers whether those rulers were Kings or Commons.

Empson takes a Marxist view of history, which may not be everyone's cup of tea. Me, I think it is possibly the only way to look at history. Not everything might have an obvious economic motive but down there somewhere it usually exists. For example, I'd never really considered the economic effect of the dissolution of chantries on the rural poor but Empson explains it well. And if that's your bag you can go read up on it in more detail.

To conclude this rambling this is a well-researched, well-written history of an oft forgotten series of events. Recommended.