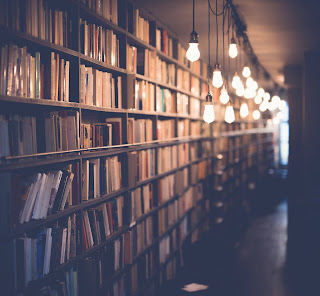 We do enjoy a good list here at The DreamCage and we're always keen on promoting library use, so Susan Omand had a look at the top 10 most borrowed books and authors from the latest Public Lending Right (PLR) office data...

For my sins, I did a Masters degree in Information Management a number of years back, so libraries (and statistics!) are a bit of a pet subject of mine and I usually make a point of keeping up with the PLR figures when they are released. Here's how the stats stack up this year.

The newly released information shows which books and authors proved most popular with library borrowers during 2016-17 and, for the eleventh consecutive year, US thriller writer James Patterson was the most borrowed author from UK libraries. He has held this title since 2006/07 and during that time his books have been borrowed over 22 million times. During 2016-17 his books were loaned over 2 million times and his most popular title with library borrowers was Bullseye (at no 9 on the Most Borrowed Titles list).

James Patterson said of the result “I’m delighted to be the most borrowed author in UK libraries for the eleventh year running and it’s great to know my stories are still so popular with the UK audience! I firmly believe that better readers become better thinkers and I think libraries are an integral part of any community as they are essential in helping to share and spread the joy of reading.”

My question regarding the result is, simply, WHY? I don't mean this in a nasty way, because Patterson is a good writer, I'm just curious as to why it's now eleven years in a row at the top for him, why has nobody else achieved this level of success, and that "why" is something that the numbers can't tell us. It could be because he writes serieses (sp?) of books, with the same characters featuring in many different novels, so people clamour to read the next one as soon as it's released, or it could just be that he's a very prolific writer and has a huge number of books out there that are available to the library audience. Or (the cynic in me) that he's an author that "everyone" talks about, so people borrow a book to try it rather than buying one, because they "should" like it but are afraid they won't.

It's also interesting to note the number of specifically children's book authors are in the list, occupying seven slots out of the top ten most borrowed authors list below. This can either be seen as an optimistic look at a future generation of readers and library users, with parents taking time to read to/with their children, or it could be a more cynical look at the price of buying books for voracious young minds which makes the library a more cost-effective measure for them. In either case it is a heartening thought that very few, if any, of the top children's books borrowed can be blamed on TV and film tie-ins because the authors on the list suggest that it's classic read-aloud bedtime stories like Room on the Broom or new fairy tales that are being borrowed rather than Paw Patrol and Tellytubbies (are Tellytubbies still a thing?)

Something that CAN possibly be attributed to a film though is the popularity of The Girl on the Train on the list of top ten titles borrowed with both the hardback and the paperback making the list. And thrillers make up the whole top ten which suggests to me that a) it's a certain type of reader that makes most use of libraries or b) most thrillers can only be read once so there's no point in buying them. But I may be wrong on both counts. Here's the list:

So where did all this data come from? PLR was established by Act of Parliament in 1979 and is run by the British Library. It's the system that gives authors and other book contributors (illustrators, photographers, editors, narrators etc) the legal right to receive payment from government each time their books are borrowed through the public library system. In February 2018 PLR distributed £6 million to 22,108 authors at a Rate Per Loan of 8.20p. A change to PLR came into effect at the start of this month too to take account of the "digital revolution" when the PLR office started to collect remote ebook loans data, so it will be interesting to see how many e-books libraries actual lend out when the data becomes available in 2020.

If you're interested (you know you are!) you can find more PLR statistics on their website including breakdowns of the top titles and authors borrowed per area in the UK (yes people from different parts of the country read different things) as well as the top 500 most borrowed authors.

So support any authors you know, buy their books, read their books, borrow their books from libraries, talk about them and review them to encourage other people to read them. Just, please, never, ever, buy or download a pirated copy of a book because the creators receive nothing from them and that is unfair.  But that is a rant for another day.