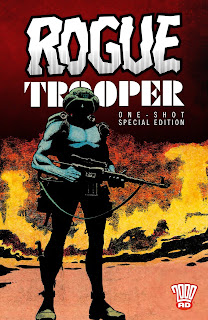 2000AD's Rogue Trooper is coming to life thanks to Duncan Jones and, to celebrate, 2000AD are offering everyone a FREE download comic...

Acclaimed filmmaker Duncan Jones is to bring Rogue Trooper, a character from the legendary award-winning British comic book 2000 AD, to the big screen. It will see the critically-lauded director of Moon, Source Code, Warcraft and Mute write and direct the as-yet-unnamed picture.

Jones confirmed the new joint venture between Liberty Films and Rebellion, the Oxford-based games publishers and owners of 2000 AD, on his Twitter account yesterday after teasing the announcement for a few days with tweets like this.

“For years now, I have felt a sting as Marvel and DC have poured out their entire comic roster into film. Wonderful for their fans, but every new release I silently scream “Where’s all the 2000 AD?!” I'm so excited to finally be able to right that wrong and bring Finley-Day and Gibbons’ Rogue Trooper, a seminal British spun war yarn, to the big screen!" said Jones.

Duncan Jones is one of a generation of leading British film directors who have been inspired by the satirical, anti-establishment and hyper-violent comic strips in 2000 AD. First published in 1977, 2000 AD has been at the cutting edge of British culture for four decades and continues to publish ground-breaking science fiction, fantasy, and horror comics.

Jason Kingsley, CEO and Creative Director of Rebellion, said: “Rogue Trooper has always been one of my favourite old school thrills from 2000 AD. I’m very happy to be working closely with Duncan and Stuart on this project and look forward to seeing the results on the silver screen.”

Chris Kingsley, Co-founder and CTO of Rebellion, added “The first time I met Duncan he had a Mohawk – I’m tickled pink to see he’s now brought it back with a full-on Nu blue. It shows his unique level of commitment and passion for Rogue Trooper, and that’s why we’re so excited to be working with him and his legions.” 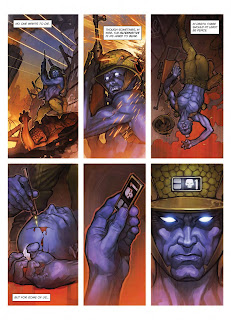 The deal was negotiated by producer Stuart Fenegan and Rebellion’s Jason Kingsley. Fenegan will produce the film under his and Jones’ Liberty Films banner, Jason Kingsley and Chris Kingsley will Executive Produce.

Rogue Trooper is one of the greatest characters to come out of 2000 AD, which also publishes characters such as Judge Dredd, Nemesis the Warlock, and Strontium Dog. Created by Gerry Finley-Day and Dave Gibbons, Rogue Trooper is a genetically-engineered soldier bred to fight on Nu-Earth, a hellish planet consumed by an endless war between the Norts and the Southers. The sole survivor of a massacre that claimed his fellow GIs, Rogue sets out on a mission to find the traitor who betrayed them – the personalities of three dead comrades plugged into his helmet, backpack, and rifle.

As well as downloading the FREE COMIC to read some of the new and classic Rogue Trooper stories from 2000AD, watch this video to find out more about history and the character.  We'll keep you up to date with news as we get it.