Doctor Who - The Eleventh Hour 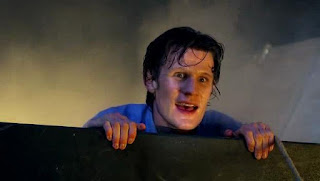 Our Doctor Who expert, Tony Cross, is journeying through all of time and space to bring us his thoughts on every available Doctor Episode. Today is the Eleventh Doctor adventure The Eleventh Hour...

And so, it begins. A whole new era. It's Matt Smith as the Eleventh Doctor and - something I didn't particularly hammer on about in the last Tennant blog - the departure of RTD as showrunner and his replacement with the man who I am hereafter going to refer to as The Moff.

It's a pretty good first story and Matt Smith is bloody fantastic from the off. Like Troughton in Enemy of the World Smith is the star of the show. He's Doctor-ish as hell and his youth - which worried me when he was cast - is utterly not an issue. Somehow, he seems to be able to carry the weight of a person far, far older than his looks, which is quite a skill. He gets some lovely little bits 'n' bobs to set up to the character, but it is his 'Is this world protected' speech to the Atraxi that stamps his authority all over the part.

That and the Fishfinger Custard.

So, fantastically cast as he is, he rips through the episode. And he bounces off young Amelia (Caitlin Blackwood) in some style too, which is to her credit as well. They make a good team. But, as we are to discover, this being The Moff there's timey-wimey stuff to be had.

The Doctor jumps into his damaged TARDIS for a quick bit of repair and promises to come straight back. Well, in five minutes.

Obviously he doesn't and after some light-hearted japes we're introduced to Amelia the Elder (Karen Gillan) hereafter called Amy. She's dressed as a Police Woman. She's a kiss-a-gram. I've commented on The Moff's women elsewhere, so I'll ignore this all for the moment.

Which brings me on to a slight problem with reviewing this episode. It's the baggage of knowing the future. Of knowing the clues and hints in the episode to the arc that will unfold across this season, the next season and yea even unto the very end of the Moff's era itself. Whenever that will be. You get the impression that the Moff has decided how to end the Eleventh's story as he begins it, although I could be doing over-estimating his deviousness.

So, it's impossible to watch this with entirely fresh eyes.

But back to Amy Pond. She's got a bit of oomph about her, but it might be early days to comment on her good-bad qualities. Gillan doesn't hit me from the off like Matt Smith but I think that's partly because I like Caitlin Blackwood's Amelia better I think but obviously you can't have a small child as regular companion so Amy it is to be.

There's a couple of stylistic bits 'n' bobs here. The Doctor's analysis of what he missed whilst looking at all the people videoing the Sun is technically interesting (and be lying a bit of a foundation for The Moff's Sherlock...and damn I'm looking ahead again) but possibly a bit annoying if it is going to happen every week.

Loved the Prisoner Zero/Perception filter stuff. I love the idea of perception filters as a thing. We've all got perception filters - just look at how people react to Prime Minister's Questions depending on their political beliefs regardless of what's happening in front of their faces. The whole idea is explored magnificently in China Miéville's, The City &The City but I digress.

It's also another one of those episodes with a series of brilliant actors in tiny little parts, which is either a sign of Doctor Who's increasing pull, a love of the series amongst actors and/or good money. I suspect the former, rather than the latter. Here we've got Annette Crosbie, Olivia Coleman, Nina Wadia and Patrick Moore (admittedly playing himself but it is still a remarkable thing surely.)

Oh and there's a nice turn from Arthur Darvill as Rory Williams, Amy's boyfriend. I wonder whether we'll see him again he says in heavily sarcastic tones. He's actually very good and sparks of Matt Smith remarkably, even if - for the moment - he's the comic relief.

There's some sowing of seeds for future episodes via the incredibly well-informed Prisoner Zero: The Silence Will Fall etc. How Prisoner Zero knows this I don't know. Probably some kind of inter-dimensional Facebook.

The basic story isn't much to write home about but then it's a Doctor introduction story, so we don't really care too much. It's all about getting us to meet the new Doctor, his new TARDIS interior (which looks lovely btw), his new companion and his new sonic screwdriver. And that it does rather well.