Doctor Who - Planet of the Dead 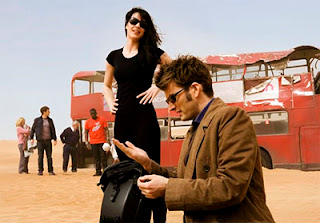 Our Doctor Who expert, Tony Cross, is journeying through all of time and space to bring us his thoughts on every available Doctor Episode. Today is the Tenth Doctor adventure Planet of the Dead...

Planet of the Dead wasn't quite as naff as I remembered it. It's fun in many respects, a proper old-school Doctor Who adventure story. It rattles along at a fair old pace, although I think it takes a little too long for the real threat to be apparent. There's no real villains because the horrible creature threat comes from something that's natural.

I think the problem is Lady Christina de Souza (Michelle Ryan). Lady Christina is a jewel thief of the Raffles school. In it for the thrills as opposed to the money, although she knows the value of the Cup of Athalstan, so I suspect the money might have been part of it. She is the companion de jour and it doesn't quite work.

I don't think it is the actress, I just think there's not much genuine chemistry between her and the Doctor, however much the writers try and crowbar it in with the witty banter and light flirtation. It just feels like everyone's going through the motions and as a result there's a little glitch with the whole story.

Also the dialogue seems not to have the right rhythm. It's trying too hard. Like the 'That's how I like things. Extreme." It just lies there. Flopping about. Perhaps I'm being harsh.

There's a scattering of other actors doing good jobs in minor roles. It's nice to see Noma Domezwani back again as UNIT Captain Erisa Magambo. An actress clearly far better than the part she's been given.

Meanwhile there's UNIT's scientific adviser, Malcolm Taylor (Lee Evans). The first time I watched this I found Malcolm bloody irritating. This time I quite enjoyed it. Yes, it's a bit over the top but it just about works because he does manage to convey the brains behind the eccentricity. And if you're going to have a character like that - who is always going to play second or third fiddle to the Doctor - then getting someone like Lee Evans in to do the part is ideal.

There's also the problem of the Tritovores who seem to be there purely to explain the plot. They might as well be call the Expositionovores and it just makes it look like no one could work out a story that could fill an hour. But it does fit with RTDs fetish for animal aliens: Rhinos, Cats and - now - Flies. A throwback to The Web Planet. Perhaps everyone is too used to that 45-minute slot.

It looks great though. The Dubai location looks fantastic and it feels like an alien world. Not a quarry, which makes a change and there's something inherently dramatic about huge shots of the desert dunes fading out to the distance. Call it the Lawrence of Arabia effect.

So to cut this short. It's OK.

Oh, and there's a little foreboding and foreshadowing of the Doctor's impending doom as one of the passengers, the rather sweet, Carmen (Ellen Thomas) is a latent psychic. She tells him at the end that his song will end soon and that he will knock four times.

The end is approaching. But first The Waters of Mars.