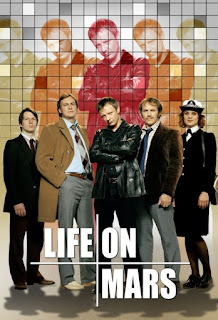 You may wonder what it is that drew me to this particular TV show; was it the nostalgia of the 70s/80s? No, considering I wasn’t alive to see them, it doesn’t have the same appeal to me. Was it because the show featured John Simm, an actor famously known for later portraying “The Master” in Doctor Who following this show’s success? Possibly, but I would go with the more likely answer that it seems to tie the detective genre and an element of time travel (in a sense) together, making it an intriguing concept. I had similar thoughts about the show “iZombie”, which tied in the concept of zombies and investigating murders. That show drew me in because I had a keen interest in zombies at the time, but over time I became more invested in the detective side. The show “Life on Mars” had a similar effect on me.

Over the time I spent watching the first season of Life on Mars, I noticed a few interesting themes, and a very intriguing contrast between how John Simm’s character of Sam Tyler investigated crimes, and how Philip Glenister’s character Gene Hunt (often referred to as “Gov”) did the same job. I think this is due to the difference in time period in which they originate. Gene, in the 1970s, seems to follow the typical “roughing up” way of interrogating a suspect, as well as following his “gut” when it comes to finding a suspect, whereas modern-day detective Sam follows the protocol of his time, that you need to gather evidence of all of the actions of the suspect, should they be most likely to be the killer, and not rely so much on what you feel is right. That’s what gives the show it’s dynamic and is what mainly makes the show so fascinating, the fact that both of these ways of investigating a crime are flawed in their own way. Gene Hunt’s way of investigating, in one episode in particular, leads a suspect to be killed in one of the cells of their own police station simply over drug usage. This shows flaws of this method in itself, because murder is what separates a criminal from a police officer. And one of the flaws I can think of when it comes to Sam Tyler’s method of finding a killer, or any suspect, is that if evidence is planted on someone, and if it's done well enough, you could end up sending an innocent man to prison despite what your gut is telling you. It's almost as if through these two working together, you're way more likely to find the right killer because they both try to make each other consider their way of investigating. Sam may be right more often than Gene Hunt, but there are still a few moments when Gene Hunt is right about the motive behind a killing and, I believe, this is the purpose of Gene being there, to help him realise that there's more to solving a crime, or finding a suspect, than just finding evidence.

I also found that the way the show portrays how characters interact with those of different ethnicity is somewhat varied. This is something I’m quite glad about, because constantly hearing racial slur would have certainly put me off watching the show altogether, but the show manages to keep it reasonable by having one if the characters, who works at a bar, as a man of Jamaican ethnicity, who advises some of the characters when they're feeling down and helps to teach Jena and Sam how to run a bar when they have to go undercover. Then there's a point when one of the characters on the police force calls a man of a different ethnicity a “colour,” which doesn’t seem as bad when it comes to racial slurs, but it's enough to make it clear the different opinions or hidden thoughts of some at the time the show is set in. This makes it interesting to see Sam's contrast with this officer when Sam tells him not to call them that, because he's from a time when racist comments such as this are not acceptable, like they were back then. This helps to show us how equality among ethnicities has improved over time, whilst also making it great to promote this equality to the viewer.

In a different episode, we find out that police of this time are forced to work with a gang leader in order to find other criminals that they're looking for, with a disguised fear amongst them in which, if they don’t cooperate with this gang leader or this way of policing, their loved ones would suffer, or they would be publicly humiliated, which we see through the blackmail material that this gang leader gets on Sam. This is another thing that we see as a good contrast with how Sam works, because he's from our time, a time in which the police very rarely cooperate with criminals to catch other criminals, and the way he deals with this is the exact way we would expect a member of our police force to deal with it, with bravery enough to stop such a criminal to make people feel as safe as they should be allowed to.

I was also fascinated by an episode related to football, and the old rivalry between Manchester City fans and Manchester United fans. This is a rivalry which, after speaking to Steve about this topic, I found out isn't as prominent as it was at the time that Life on Mars is based, mainly because a lot of people who lived in Manchester moved over to London for work and from there moved to other places, so fans of these clubs don’t seem to reside purely in Manchester any more. So, it was interesting to see how people of the time treated those who were fans of the other football team and, fortunately, we do have the character of Sam to remind these people that this really is just a game, and it’s something to be enjoyed, and hurting others over it just represents your club in a bad way if anything. We also discover in this episode that Sam doesn’t believe that someone would purely kill another person over a football team, but it then turns out that Gene is right, showing us that in some circumstances, especially those that involve the mindset of some people at the time, familiarity can help at some things, showing that there are times when a cop should follow their gut instincts.

It seems to me that, a lot of the time, John Simm’s character of Sam represents us as an audience reacting to Gene Hunt’s methods at the time, when Gene does things such as beating someone up into a confession or scaring them, or simply threatening to stamp on some kid’s toys, which for me was actually funny (sure, call me evil!). And there's something about Sam and Gene’s personalities that just makes them a perfect team because they are such an awful team. It's sort of like the belief that opposites attract, and this really seems to be the case with these two because it is what makes them work well together when they're interrogating a suspect in different ways. It almost makes it seem as if, from the suspects perspective, that they don’t have a method in mind for getting a confession from someone. Or it could even be the idea of the good cop and the bad cop brought onto the screen, because we have Sam Tyler as the good cop, asking for alibis, asking to come into houses, and then we have Gene Hunt, who breaks doors down to take people in and scare them into confessions, which is what makes them the perfect duo. My theory of these two as that the both represent a side of Sam’s mind that is the good cop and the bad cop, and the message of this dream that he’s stuck in, is that you need to embrace an element of your bad cop sometimes, to get the job done.

Overall, I would honestly put Life on Mars up as one of my favourite TV shows of all time. Despite the fact that I didn’t understand any of the pop-culture references made in the show, it still had a fun and intriguing concept that would make it watchable and enjoyable to any audience, whilst keeping it informative and entertaining to those of us that didn’t grow up during this time.