Doctor Who - Planet of the Ood 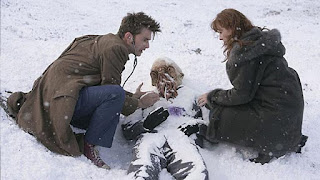 Our Doctor Who expert, Tony Cross, is journeying through all of time and space to bring us his thoughts on every available Doctor Episode. Today is the Tenth Doctor adventure Planet of the Ood...

Sometimes, when you least expect it, there's a Doctor Who story that reminds you of the reasons you love Doctor Who in the first place. Often it isn't one of the more highly praised classics. Often, it's a surprise.

Planet of the Ood is wonderful. There I said it.

It might not be perfect, but it is pretty much forty-five minutes of delight that reaffirms (for me) the Doctor's central core. His belief in the 'rightness' of things, as Colin Baker once delightfully put it.

The gradual realisation of what the Ood really are, the way they're treated and what is done to them and the Doctor - and Donna's - righteous indignation are laid out superbly. Each extra step more horrifying than the last. When you realise what is done to them to domesticate them it is genuinely shocking.

Plus the moment when the Doctor lets Donna hear the Ood's 'Song of Captivity' is heart-breaking for both us and Donna. So painful that she asks the Doctor to stop it. That little scene is a brilliant (almost) two hander between David Tennant and Catherine Tate.

About songs, I can't stop singing Catherine Tate's praises. There are classic series companions that I have a soft spot for: Ian and Barbara, Jamie, Sarah Jane, Leela, Romana II, Peri and Ace but these three stories have pushed Catherine Tate to the top of one of those pointless lists of 'Best Companions'. She's a proper human being seeing what's out there in the Universe. She's learning the good and the bad. And Catherine Tate is just an astonishingly good actress.

I could go on and on about this. To the point of utter tedium. If there is a companion by which all others are judged for New Doctor Who it is Donna. Give me more of companions like her. Less fantasy, more reality. Less mystery, more truth.

The story is helped by a good solid performance by Tim McInnerny as Halpen who the villain of the piece is. Another illustration of how human beings can be corrupted by something as banal as money. Even in the 42nd century. So corrupted that he can't see - or chooses to ignore - the horror of what he is doing. The banality of evil in a pin striped suit and worrying about sales figures and hair loss. His fate is awesome. The other minor 'jobsworth' sidekicks all get their comeuppance too, but their punishments are more Old Testament. Halpen's punishment is an Ovidian metamorphoses type of vengeance.

I love the Ood too. The way that some thought has gone into their culture. Even if that fore brain, hind brain & other brain thing doesn't make a great deal of sense (to me at least). Perhaps there's a biologist out there that can tell me such a thing is possible. But forgive me for some mild scepticism.

Their voice - the work of Silas Carson - sits on the creepy edge of subservient so when they go 'bad' they are genuinely scary.

There's politics in here too: on humans - explorers or virus; on capitalism and slavery, "Who do you think makes your clothes"; on the dangers of certainty and on animal rights. It's all there. Although picking politics out of Doctor Who is a bit like picking the bits out of the Bible to justify a view. We always miraculously seem to see the bits that suit our political views and miss the bits that don't. So being an old school left-winger I'm bound to see these things. But hey, this is my article and I'll see what I like.

It's also - like a lot of Doctor Who - a hymn to action. The thing about the Doctor is he doesn't just get cross and write a rude blog or send a sarcastic letter via Friends of the Ood, he gets off his arse and gets involved. Doctor Who is nothing if not an almost 50-year advert for direct action, even if the Time Lords don't like it. But there I am again with the politics.

To cut a long article short. Loved it. Absolutely.

PS I was so desperate to crowbar a 'seeing the Ood for the trees' joke but couldn't do it. So, I'm throwing it in here for someone to pick up & run with. Good luck.