Film - The Death of Superman 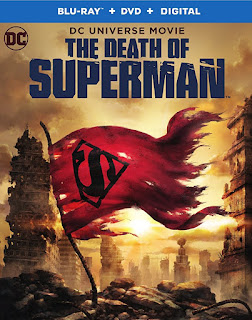 Apparently the first direct-to-video DC animated movie to use the DCEU DC logo, watch the trailer for The Death of Superman, coming to DVD and Blu-ray next month...

Feature length animated film The Death of Superman ultimately finds Superman in a fight to the finish when the Man of Steel becomes the only hero who can stand in the way of the monstrous creature Doomsday and his unstoppable rampage – hell bent on destroying everything and everyone in his path, including the Justice League – in the all-new, action-packed The Death of Superman, part of the popular series of DC Universe Movies.

Directed by Batman: The Killing Joke's Sam Liu alongside Jake Castorena and with a cast that includes Jerry O'Connell as Clark Kent, Rebecca Romjin as Lois Lane, Rainn Wilson as Lex Luthor (and Nathan Fillion as Green Lantern!) among many other well known voices, The Death of Superman comes to Digital on 24th July and DVD/Blu-ray on 6th August.