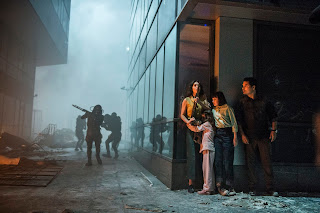 Netflix has released the trailer for their latest sci-fi thriller Extinction, due on-screen at the end of this month...

A father has a recurring dream of losing his family. His nightmare turns into reality when the planet is invaded by a force bent on destruction. Now, fighting for their lives, he comes to realize an unknown strength to keep them safe from harm.


Extinction premieres on July 27th, only on Netflix