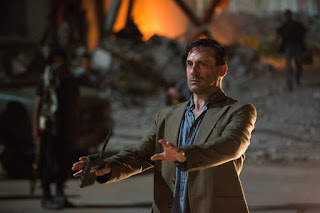 Susan Omand sees both sides of The Negotiator...

I do love a good political thriller so I had high hopes for this offering, starring Jon Hamm as an ex-Embassy diplomatic negotiator drawn back to an old stomping ground to recover a CIA friend from way back who has been kidnapped. So far, so generic you might think and you’d be right, kinda.

As a film, it has a lot of good people thrown at it; the screenplay is by Tony Gilroy (writer of the Bourne films); it’s directed by Brad Anderson (of The Machinist fame) and with a cast that, as well as Hamm, includes Rosamund Pike, Dean Norris and the ever-wonderful Mark Pellegrino, I thought it had to be worth a watch and, if you treat it as a generic thriller, yes, it’s fine. The end-point is pretty predictable in a blockbuster Bourne kind of way, most of the cast did their jobs to the level you’d expect of them (although I agree that a few were underused for their abilities) and it was an entertaining way to pass two hours of an afternoon.

BUT, for me there were three things that lifted this film above the level of generic.

Firstly, Jon Hamm. If you’ve only seen him in Mad Men, you’ll think that the drink-fuelled, bitter asshole with a knife-sharp mind and a gambler’s nonchalance for putting himself and others at risk, is his only stock in trade because, yes, that’s the character you get here too. However, I’ve seen him in enough different roles to know that this is first-rate acting. He goes from suave diplomat, to beat-down, broken, two-bit union mediator to “boots on the ground” rogue mission specialist both easily and believably. You know from the story why his character like this, why he’s pulled back from connecting with others on anything more than a superficial level and there is a subtlety and a humanity to the way that he plays the role.

Secondly is the look of the film. Between the tightness of Anderson’s direction and, especially, the atmospheric cinematography of Björn Charpentier, the film looks beautiful. The lighting, the choice of locations and the dressing of the sets, especially within the war-zone itself, was stunning and some of the long shots and over-head shots really hit home for me in conveying the mood of the time.

Which brings me to the third thing – the time. Setting the film in 1982 Beirut was inspired as it opened up a lot of interesting possibilities with the multiple parties in play and everyone with their own agenda. I have the dubious pleasure of being old enough to remember the news coverage from Lebanon before the siege of Beirut in the early 80s and a lot of the events mentioned in the film were real, which helped to ground the plot more for me. I know I said too that the end point of the film had a blockbuster predictability about it but the means of getting there was cleverly wrought and used the multiplicitous nature that warring factions bring, and the chaos caused by them, to build in clever twists I never saw coming.

For me The Negotiator snapshots a moment in time very well, the tension, that urgency of sporadic fighting and the manifold levels of politics going on, both above and below the table, with gains, both personal and patriotic, to be made – it was never going to be a black hat/white hat situation and you’re never going to be on the winning side of everything so you do what you have to do to get the end result you want. And I think this film is the same – treat it like a generic thriller and that’s what you’ll get but dig a little deeper into the who’s and why’s and it will deliver that little bit more.