Film - Mad to be Normal 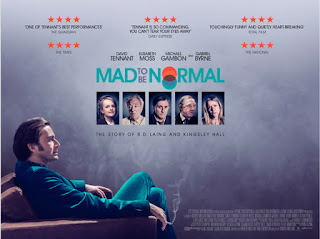 Goldfinch Studios have announced that the biopic of controversial 1960's psychiatrist R.D. Laing, Mad To Be Normal, will be released on Digital next month. Watch the trailer...

Based on real events, Mad To Be Normal stars David Tennant as the celebrity psychiatrist who revolutionised the treatment of people diagnosed as ‘mad’ and is a chilling insight into some of the unconventional methods used on mental patients in the 60’s.

Working out of Kingsley Hall in East London throughout the 1960s and 1970s, Laing, considered one of Scotland's greatest ever minds, performed various daring experiments on people who were diagnosed as mentally disturbed. His methods involved experimenting with LSD on his patients and practising a form of self-healing known as metanoia, deliberately forcing a crisis point or causing a psychotic breakdown in order to stimulate a fundamental change in character and encourage the healing process, causing outrage and controversy in the medical profession and radically changed attitudes and perceptions of mental health around the world.

Alongside Tennant, in the Robert Mullan directed biopic, is a host of award winning actors including Elisabeth Moss, Gabriel Byrne and Michael Gambon.