Film - An Act of War 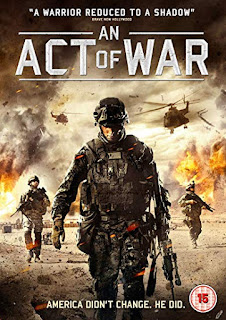 Finally available on DVD in the UK from today, a reminder of Ren Zelen's thoughts on An Act of War from 2015...

We‘ve all had moments of disgust or despair - times when we have experienced an almost overwhelming desire to mete out some kind of justice when we see terrible acts left unavenged – it’s a natural and perhaps even a healthy, human impulse. We want things to be right and fair. But, sad to say, we are also aware that life is rarely fair, and we may even sometimes feel shame at our powerlessness to mend what we may see as a broken world.

An Act of War is an affecting testament of how that impulse towards justice becomes misguided and warped by mental pain and profound trauma. It serves to lay open a mind damaged by guilt and alienation.

The story follows a recently returned veteran Jacob Nicks (Russ Russo) as he struggles to adapt to society and reconnect with the world he left behind prior to being deployed in the Middle-East. Battling chronic insomnia and post-traumatic stress disorder, he finds a job as a projectionist working the night shift at a decrepit theatre. Shunning his family and retreating into an isolated existence, Jacob tries to find stability by following a monotonous routine. He goes to his night job as a projectionist, visits Ivana, (Natasha Alam) a Russian prostitute, and views 16mm reels of home movies in his shabby apartment. He rebuffs people who inquire about his wellbeing and tries to ignore the mysterious man who appears to be following him.

During yet another sleepless night, having coffee at his usual diner after the evening shift, he meets Marlon (Doug E. Doug), a twitchy drug-dealer, similarly dissociated from society. As Jacob struggles to adapt to his new civilian life, circumstances conspire against him and one setback piles upon another. He suffers a savage rejection by Ivana when she discovers he has been secretly filming her, exposing his delusion as to her having any genuine affection for him. She re-iterates that she never presented herself as the ‘tart with a heart of gold’, nor as any type of refuge or salvation for the damaged man. She merely pitied him, and prefers to retain the relationship on the basis of prostitute to client.

As his tenuous hold on his life begins to crumble, Jacob turns to Marlon for the one escape he knows Marlon can provide: Heroin. Marlon is initially unwilling, warning him against addiction, but as his paranoia increases, Jacob is never convinced that Marlon is really the mild mannered friend he presents himself to be.

As his addiction and desolation increase, the instabilities of his own damaged consciousness begin to take over, spinning out of control and leading Jacob down a path of paranoia and violence. Unable to assimilate into ‘normal’ society or move on from his suffering, Jacob begins to see society as an evil – a sickness to be cured – and vigilantism as being the only route open.

As the tortured lead, Russ Russo is the focus of the film, and his performance lives up to the task. The actor has the ability to switch from anguished, lost and distraught to terrifyingly vengeful in the blink of an eye. It is pretty much a one man show, and his performance is a subtle and restrained portrayal of a man whose fragile mind isn’t able to comprehend or counteract its own fractured state. In my case, he brought to mind a low-key, PTSD-suffering Travis Bickle in Taxi Driver.

Along with a strong central performance An Act of War offers a striking and brave visual style. Utilizing only the dusky black and white palette of 40’s noir films for Jacob’s story, writer/director Ryan Kennedy captures Jacob’s grim descent into madness. To emphasise this as a storytelling device, Kennedy chooses to bookend the film in colour. A sparse and memorable score accentuates Jacob’s harrowing journey.

Ryan M. Kennedy directed An Act of War from a script he spent two years developing while working full-time as a waiter at a Midtown Manhattan restaurant. He showed a finished draft to French cinematographer Nicolas Canton, who was living in New York City and the two planned to produce the film with a sum of their own money and then as a Kickstarter project. After receiving a copy of the script in January 2011, producer Atit Shah offered to partner and thus began the work on expanding the project.

A bitterly tragic movie that highlights the horrors of war and the plight of those that return to face their own demons when their war is over, An Act of War is skilfully scripted and sensitively acted. Prior to its release the picture won four film festival awards including Best Picture, Best Director and Best Actor at the New York-based Take Two Film Festival. (The movie was also hailed as the first film to ever have a limited release using Kickstarter prior to more mainstream film distribution).