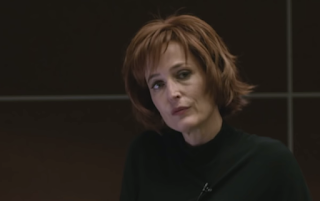 Do you reckon the truth is still out there? Watch the trailer for UFO, coming to Digital and DVD in September...

Derek (Alex Sharp) a brilliant college student, haunted by a childhood UFO sighting, believes that mysterious sightings reported at multiple airports across the United States are UFO’s. With the help of his girlfriend, Natalie (Ella Purnell), and his advanced mathematics professor, Dr. Hendricks (X-Files’ Gillian Anderson), Derek races to unravel the mystery with FBI special agent Franklin Ahls (David Strathairn) on his heels.

Surprisingly though, we couldn't find an acting credit for Gillian Anderson's wig...