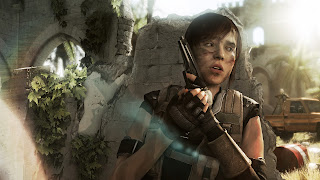 It's a matter of life and death as Kraig Taylor-Bryant looks at the game Beyond Two Souls by Quantic Dream...

“The World is afraid of those that are different”

a quote I heard once when caring for the character of Carl in one of Quantic Dream's more recent projects Detroit Become Human. Interestingly enough, in one of their earlier projects, Beyond Two Souls this quote also applies, despite the fact it was made before Detroit.

This company has again surpassed my expectations with another tragic yet gripping story, of a girl who was born with a paranormal entity attached to her. From an early age, some kids seem to like the idea of having their own imaginary or invisible friend when they feel lonely. But this girl has her own real imaginary friend, one that protects her and interferes with her social life, constantly making her life a chore and continuously makes others treat her differently. Jodie is different in this way and, because others don’t understand her, they constantly both verbally and physically abuse her for it, whether it be by calling her a witch, or throwing her in a cupboard under the stairs, or even just running tests on her, like a lab rat. This story creates empathy for the characters and how much of a hard life the protagonist, Jodie, is having.

From the title screen the player gets the option to play the game in 1 of 2 ways. One being the chronological way, in which you see the tragic aspects of her life unfold in order, to help the player better understand what’s going on. Or, (the one which is my personal favourite) the order in which Jodie tries to recollect these events and you find out the full story, and why she can only recall them randomly, at the very end.

The game shows the theme of loss multiple times, which according to a behind the scenes video of Beyond Two Souls, was the intention of David Cage, when writing the story for this game, as he had recently lost someone, and wanted to make a game that would give a different explanation of death. Jodie loses many people throughout the game, I won't go into detail on the essential characters of the plot, but some of her losses include her biological parents at a young age and her adopted parents, who abandon her, after strange things start constantly occurring around Jodie (this being Aiden, the “imaginary friend”, when he tries to protect Jodie). Jodie continues to lose many other people, both ones she meets along the way and becomes close to, as well as people she meets for a short while, however, whether Jodie sees them again can all depend on Jodie's decisions at some stages of the story.

The theme of loss is shown very prominently when others around her also lose someone close to them, such as Nathan, her “Surrogate father” (to quote William Defoe, the actor who plays Nathan), who, during Jodie's earlier stages of knowing him, loses both his wife and his daughter. And we start to witness some signs that he cares about Jodie more than ever now, because he wants to use Jodie and Aiden to help him communicate with his family from the “Infraworld”, a place where the dead of our own world go, alongside other things that live in such a place. Jodie also meets characters for a brief time have also experienced losing somebody close to them. It's almost as if, throughout this game, death is taunting her, death meaning the Infraworld, and she keeps ending up being on this edge, between death and life. Of course, since Jodie and Aiden are the only main characters you play as, they can't choose to jump over it in the early stages of the game. But at the very end, she has that option, to end her suffering, to leave life behind life and choose a place that’s better and more peaceful. 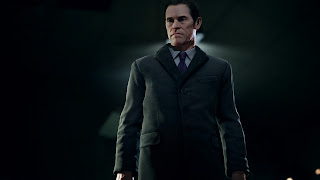 That’s not what I chose when playing this game. In my playthrough of this game, I made a number of decisions based on my opinion of certain characters, such as Ryan, a character who was just following orders, when telling Jodie that her mission is to kill a peacekeeper. I later understand how bad he feels about this and eventually quits his job for her, so, playing as Jodie, I make her choose to give him another chance. Meaning that my version of Jodie (if you will) still had someone waiting for her in life. And that’s what I believe is always important, as long as there is somebody to miss you, then it's always worth facing life head on, because you know you won't be facing it alone, and you wouldn’t want them to either.

Jodie also goes through other tragic stages of her life in this game, in addition to losing people. She also has to suffer nightmares as a child, but nightmares that can actually hurt her, and that’s what makes this form of nightmare scarier than any other. It’s what makes Jodie such a strong character, the fact that she can endure all of this, she suffers so much but that’s what makes her a stronger person. She also has to go through blindly following the CIA’s orders to kill a man, despite the fact that they are wrong, leading innocence to get killed, and helping her to understand what her own government is capable of. As the game progresses she also experiences some other horrible events such as physical abuse from her adoptive father, attempted sexual abuse from a man in a bar, when she thought she was going to a party, and homelessness, a thing that many people hope to never go through.

The game can have many different endings, depending on what the player chooses, whether they believe that it's better to have a peaceful afterlife, to experience the beyond, or to face life. What's really interesting is that Jodie seems to start to lose more as she faces life, since life really is precious because it can be damaged so easily. I think this is the message of the game, that despite all you might endure in this life, that’s what makes it so special.

It’s a pretty cruel contrast between Jodie's actions and the way life seems to treat her, even when she is looked after by her adoptive parents, they limit the places she can go outside, when all she really wants to do is have fun. It’s the fact that Aiden and Jodie are pretty much always the victims that really helps you invest in them. Even when Aiden is hurting other people, it’s usually to help Jodie, if he believes that’s he’s in danger, but the people around her don’t see it that way, because she only seems to meet horrible people in these circumstances, leading the kinder people to misjudge her when those around her twist the truth to make Jodie look like the “Witch” or the “monster”.

The horrible fact is, that this all does go down to the fact that she is different, the fact that she is constantly surrounded by this entity that just wants to protect her and do what's best for her. And it also shows that this is definitely the case in the world we live in. That is the harsh reality, of course there are some out there that will see the good in these people that are different to them, whilst others will want to make their life difficult by being horrible to that person. And Quantic Dream seems to strongly support changing this way of thinking for the better, and that’s just another reason to love the kind of work that David Cage, the lead writer and producer, does at Quantic Dream, and another reason to check out these games.