Doctor Who - The Unicorn & the Wasp 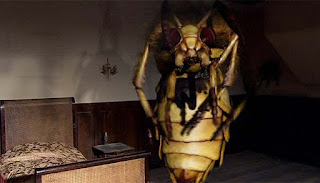 Our Doctor Who expert, Tony Cross, is journeying through all of time and space to bring us his thoughts on every available Doctor Episode. Today is the Tenth Doctor adventure The Unicorn & the Wasp...

This story, written by Gareth Roberts, wasn't one I warmed to on first watch but this time around I really enjoyed it. Perhaps I just 'got it' this time. Perhaps I've remembered how much of the enjoyment in Doctor Who is in its' infinite variety. Want a Ten Little Indians style Agatha Christie story with added Giant Wasp, then you can have it. You want Agatha Christie in the story too. Why the hell not.

It reminded me a little of Black Orchid and Big Finish's Auntie Matter (even though the latter obviously comes later) but oddly I felt it could have been a Season 16-17 Tom Baker and Romana story. That might be me reading too much into Gareth Robert's regular forays into that era, but it is my confused mind here so I'm sticking to that.

We're in the English countryside where Lady Edisson (Felicity Kendal) is throwing a party made up of Cluedo characters, including Professor Peach (Ian Barrit); Reverend Golightly (Tom Goodman-Hill), Colonel Curbishly, who is Lady Eddison's husband (the great and glorious Trevor Benjamin); Roger Curbishly* (Adam Rayner); Robina Redmond (Felicity Jones) and Agatha Christie herself, played rather beautifully by Fenella Woolgar. Phew. Of course, being an Agatha Christie story they all have secrets.

I'm going to stop here for a moment and make my usual complaint about New Doctor Who's pseudo-historical, which is the gentle undermining of the historical character's creativity in the name of time travel jokes. I'm sure I'm almost alone getting irritated by this. It's not just televised Doctor Who either. Big Finish did it with Mary Wollstonecraft. Basically, we're told how brilliant a character is: Shakespeare or Christie and then the Doctor (or Donna in this case) 'accidentally' feed them their lines, characters or story ideas. Thus, making said historical figure less impressively creative and more a stealer of lines and stories.

I know, I hear you cry, I should let it go but I think it does a disservice to real, clever and creative people and it annoys me.

Anyway...Professor Peach (Ian Barritt) gets bumped off early. Then Miss Chandrakala (Leena Dhingra) gets clunked by a piece of statuary, which reminds me of - I think - the death of a character in a Margery Allingham story...but memory ain't what it was. Miss Chandrakala gives us the first clue by which time we've seen the Giant Wasp in action. The Doctor - after a manic and entertainingly silly interlude where he survives a poisoning attempt - identifies said Giant Wasp as a Vespiform...this could go on for a while and you don't need me to regurgitate the action scene by scene. If you want that I suggest you just watch the DVD.

Turns out Lady Edisson had an affair with an alien, gave up the resulting child but now discovers said child has returned home after an incident makes him aware of his true nature. This all comes out in a rather brilliant parody of an Agatha Christie gathering of suspects and summing up.

Turns out the Vespiform wants Lady Edisson's necklace, which is a piece of Vespiform technology that through a mental connection has given the Vespiform a very odd world view. It's basically been programmed to see the world as if it were an Agatha Christie novel. Hence, it's murderous visit.

It's a combination of The Doctor, Donna and Agatha that all this comes out & Agatha ends up chased by the Vespiform as she flees with the jewel weighed down by the guilt of creating - however accidentally - a real murderer. Donna saves the day, although not before the Vespiform does one good thing.

Agatha Christie's mind is shaken up by the link and this becomes the explanation for her genuine ten-day disappearance in 1926.

All that garbled explanation probably doesn't help any of us so to cut this article to the point I should say that this is a well-paced, charmingly performed, Doctor Who pastiche of an Agatha Christie novel. Worth watching for Fennella Woolgar, David Tennant and Catherine Tate. Plus, the utter joyful preposterousness of the whole thing.