Doctor Who - Silence in the Library & Forest of the Dead 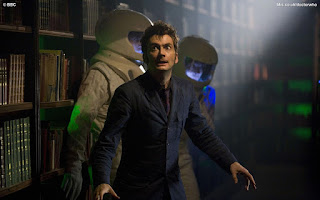 Our Doctor Who expert, Tony Cross, is journeying through all of time and space to bring us his thoughts on every available Doctor Episode. Today is the Tenth Doctor adventures Silence in the Library and Forest of the Dead...

So that was Silence in the Library - Forest of the Dead that was. Written by Steven Moffat and introducing River Song (played rather wonderfully now and always by Alex Kingston). It's a good couple of episodes.

It's atmospheric and tense. It's got a rather clever little creation in the Vashta Nerade, who are minute, swarming motes of stuff that act like the piranhas of the air. They live in the shadows. Not all shadows, just some. They're out there. In the dark. Waiting. Not everyone, as the Doctor points out, comes back from the dark.

It's well acted, and a likeable set of characters are bumped off one by one whilst the Doctor tries to work out what the hell happened and has happened.

In the meantime, there's a rather strange little parallel story - connected, of course - featuring a little girl (Eve Newton) and Doctor Moon (Colin Salmon). I've got to pause here to praise Eve Newton whose performance as The Girl is rather lovely. It's hard to get good performances from child actors and Euros Lyn does a fine job here. Their final identities are revealed as the episodes progress so it should be obvious to the viewer who they are before it is to the Doctor as Moffat gives us both stories simultaneously, sowing clues and eventually telling all. It's cleverly structured and, because not every story in the season has the same type of structure, refreshingly brilliant.

I'm going to say it. I think Moffat writes better Doctor Who when he's not the Show Runner. When there's someone above him to tell him no. Hence some of the best RTD era stories are written by Steven Moffat.

Also watching this makes me think that it isn't the Doctor that has a problem with endings, it is Steven Moffat. I wouldn't be as high-falutin' as to think that this is an issue Moffat himself has with death but there's definitely a firm wish that nobody dies.

This story ends with everybody 'saved'. No necessarily alive but saved. But what is life? Is being conscious and kept in a computerised database version of a real world 'life'? Is it consciousness that makes us 'alive'. Am I thinking far too deeply about two forty-five-minute episodes of a family adventure series. Yes, yes, I am but I do think Moffat can't say goodbye. 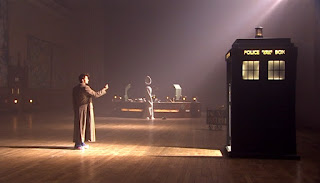 Otherwise why is River Song's story never ending. They tell writers when editing to 'kill their children', which always struck me as an over-dramatic way of describing a good piece of advice. That sometimes a writer must be brave enough to take out something that they like: a plot thread, a character, a page, a paragraph and even just a single sentence. I think Moffat finds that difficult. Hence River Song's story will last until Moffat chooses to leave Doctor Who and he will keep bringing her back. I think Moffat is a little in love with River Song. Like I think RTD was always little in love with the Doctor.

And why not? There both brilliant characters played by excellent actors. I like River Song. I think though that - as with Rose - there is a law of diminishing returns. However, I also like Alex Kingston as an actor (and if you've not seen her episode of 'Who Do You Think You Are?' you really should. It'll make you like her as a person too.)

Obviously all the above could be utter bollocks. I'm trying to see in to the head of a complicated man via the medium of a couple of episodes of television. So, feel free to ignore everything I've written and put it down to the rambling delusions of a man who should probably get out more.

And I've hardly said anything about the episodes themselves.

Well, if you want a proper review there are other reviews out there. Lots of podcasts. I recommend DWM myself they're always pretty good.

There's some nice performances but I think my favourite is Jessika Williams, as Anita. When the Doctor eulogises her in a few seconds towards the end of Forest of the Dead when trying to scare the Vashta Nerade I found myself agreeing with him. I think she'd have made a fine companion. But kudos to everyone really Steve Pemberton, as Strackman Lux; Talulah Riley as the poor, thick Miss Evangelista; Harry Peacock as 'Proper Dave' and O.T. Fagbanie as 'Other Dave'.

I think also a little mention for Jason Pitt as Lee, Donna's 'husband', in the world of the saved. We get some foreshadowing in this episode that Donna's fate isn't a happy one but the moment when Donna and Lee miss each other is probably the saddest moment in the episode. Everybody might live but not perhaps happily ever after.

Catherine Tate and David Tennant do another sterling job. It almost goes without saying now. They're a Doctor-Companion team worth watching. I could rave about them both again, but it hardly seems fair on your poor reader.

So well done to all concerned. This was good.