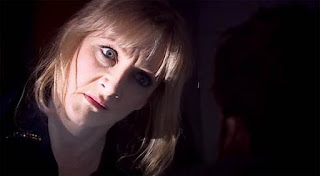 Our Doctor Who expert, Tony Cross, is journeying through all of time and space to bring us his thoughts on every available Doctor Episode. Today is the Tenth Doctor adventure Midnight...

So, Midnight turned out to be rather fine.

A claustrophobic little number, with a fantastic cast and which - at points - was genuinely amongst the creepiest Doctor Who episodes ever.

It was Donna light as she stayed in the leisure palace getting some hefty sun rays whilst the Doctor decided to take a sight-seeing trip and as he says himself in the pre-credit sequence, 'What could possibly go wrong?'

Even planets bathed in sunlight and made of diamonds have their shadows and if anyone can find a shadow it is the Doctor.

It starts with an engine failure, then there's a mysterious hammering on the ship's hull. And like knocks on a submarine in empty water it rattles you and then...

Well then Lesley Sharp steps into the limelight and gives a genuinely disturbing performance as the possessed Sky Silvestry. First, she's silent, immobile and staring and then she starts copying what people are saying, which is creepy. But then she's starts speaking the same words at the same time, which is really, creepy.

At which point the passenger hysteria begins to build, although there's a hint that their increasingly argumentative nature is partly the effect of the thing - as I'm going to have to call it - that's taken over Sky.

There's some fine work from everyone in the cast at this point and as they - almost as one - turn on the Doctor, you begin to think this is going to end badly.

Then Sky steals the Doctor's voice.

And at this point you are remind of precisely how brilliant an actor David Tennant is. Even as he's trapped, voiceless and about to be thrown out you can see the Doctor in there. Fighting.

At this point - even though I have seen this story before - I was genuinely on the edge of my seat. It looked like the manipulation of the thing plus the hysteria of the passengers was going to make this a bad trip for the Doctor.

Of course he survives but you get the impression from the ending that this really took it out on the Doctor and that this was one adventure he wasn't likely to get over quickly. Another sacrifice is made and the Doctor lives to fight another day.

There's a brilliant moment where one of the passengers, Val Cane (Lindsey Coulson), says 'I knew it was her' and the Doctor's look of absolute cold contempt is a wonder to behold. He knows what she tried to do. And she knows too, which is why her discomfort that follows is pitch perfect.

I think everyone in the cast deserves applause for this because it was so much about the people, their relationships and their fear that it would have fallen apart if anyone hadn't been up to snuff. There's David Troughton's slightly fuddy-duddy Professor Hobbes who might have problems re-building his professional relationship with his assistant Dee Dee (Ayesha Antoine) who is one of the few people who in the last terrible moments seems to keep her head.

There's also Colin Morgan, Merlin to be, as Jethro who also seems to be pretty sensible and who the Doctor seems to take a liking to.

Daniel Ryan as Biff Cane (husband of Val) does a good job of illustrating that special kind of male fear that displays itself through belligerence. He gets a lot of shouting. Him and Val make a very domestic kind of Lord and Lady Macbeth.

Finally, there's the nameless Hostess who is the real hero of the piece. Who not only sees what's going on, like Dee Dee, but acts on it. Action is everything. Her namelessness makes for a rather sad little moment at the end.

I could rave about this even more, but I think I've done enough.

For me this THING is the scariest monster (if it can be called that) in New Who so far. It certainly freaked me out more than the Weeping Angels ever have.