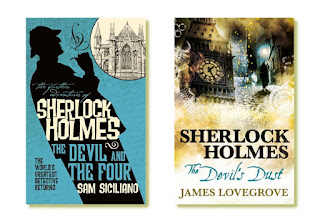 The game's afoot as not just one but two devilish Sherlock Holmes related novels are coming from Titan Books in the next few weeks...

The Devil and The Four by Sam Siciliano comes out on August 7th as Sherlock Holmes’ latest case takes him to the heart of Paris, in pursuit of Marguerite Hardy, a mysterious Frenchwoman who fled her English home when she received a strange letter. Desperate for her safe return, her husband begs for Holmes’s help. But Holmes’s investigations will take him and his cousin, Henry Vernier, into a world of theft, seduction and betrayal – and uncover a secret that has been buried for twenty years.

Sam Siciliano is the author of several novels, including the Sherlock Holmes titles The Angel of the Opera, The Web Weaver, The Grimswell Curse and The White Worm. He lives in Vancouver, Washington. 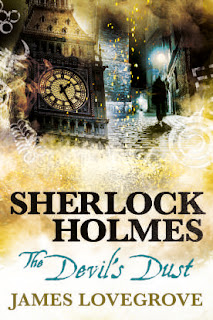 Before that though, Sherlock Holmes The Devil's Dust by James Lovegrove is published on July 24th.

It is 1884, and when a fellow landlady finds her lodger poisoned, Mrs Hudson turns to Sherlock Holmes. The police suspect the landlady of murder, but Mrs Hudson insists that her friend is innocent. Upon investigating, the companions discover that the lodger, a civil servant recently returned from India, was living in almost complete seclusion, and that his last act was to scrawl a mysterious message on a scrap of paper. The riddles pile up as aged big game hunter Allan Quatermain is spotted at the scene of the crime when Holmes and Watson investigate. The famous man of mind and the legendary man of action will make an unlikely team in a case of corruption, revenge, and what can only be described as magic…