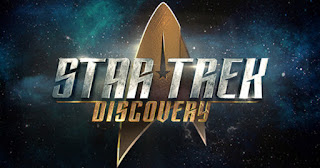 Mentioning a major Season 1 spoiler, the Defective Inspector has a few thoughts about the Season 2 trailer for Star Trek Discovery...

So the penny has dropped as the most divisive incarnation of Star Trek gives us a glimpse of what’s to come. Now I am a long-standing Trekkie fan, as long as my life has allowed at least, and Discovery was a confusing experience for me. I have reservations about the whole premise and that feeling of unease continues after watching Season 2’s trailer. Have a quick watch…

Okay so you are now up to date. The show continues its dark backgrounds with excessive lens flare, a great metaphor for the series thus far. It looks like we’re are set for another x number of episodes of space-war-drama with the light dash of comedy from the likes of Doug Jones and Mary Wiseman, ironically two of my favourite things about the show.

There are a few hints of levity being encouraged, something much needed from Season 1, but I am not entirely convinced it will get much better. Burnham is still a Spock knock-off, Lorca is still dead and the choice of music for the trailer is ominous. Nothing good can come from Lenny Kravitz. Not because he is a bad musician, but his forte is the dramatic and overstated. Even worse there is desperation in the air. You don’t bring in Chris Pike and mention Spock if you are not trying to grab cinema goes to watch the franchise. It’s almost upsetting to see that Star Trek is now pro-movie and anti-series when it was usually the other way around.

Perhaps I’m still a bit bitter about the direction Star Trek is taking by killing Captain Lorca, but my hopes are fairly low. When I reviewed Season 1 I said there was potential, but I don’t see it being tapped. It’s more of the same and that isn’t a good thing. I will be watching the show, I never consider a trailer enough to discourage me to do anything, but I won’t be rushing towards it with the same gusto as Orange is the New Black or Better Call Saul.