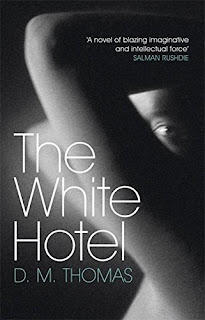 The White Hotel is one of the most famous unmade movies of the last thirty years. Now for the first time, director Jon Amiel who worked with Potter on The Singing Detective, brings Dennis Potter’s screenplay of this Booker nominated novel to Radio 4 audiences.

The story centres around Lisa, a circus performer, who visits celebrated Berlin psycho-analyst Dr Probst in order to discover the cause of the mysterious pains she is experiencing in her left breast and pelvis. As Probst attempts to unravel the true cause of her pains and is allowed to read her sexually charged journal, he is sure that the answer to Lisa’s condition lies in her past. Lisa initially plays along with Probst’s investigations, but eventually reveals that she also experiences unsettling premonitions of the horrors that lie ahead in the Second World War: “I see what is going to happen. And what is going to happen cannot be endured.”

Thomas’ novel has struggled to be converted into a film almost since its inception. Directors including Bernardo Bertolucci and David Lynch have all made attempts to adapt Thomas’ novel for the screen, with a potential cast that has included Nicole Kidman, Meryl Streep, Isabella Rossellini, Anthony Hopkins and Ralph Fiennes.

With this adaptation starring Anne-Marie Duff as Lisa and Bill Paterson as Probst, the cast for Radio 4’s production also includes Simon McBurney as the Narrator, David Gyasi as the Lover, Nigel Lindsay as Victor and Morwenna Banks as Aunt Magda.

Director Jon Amiel said “I read The White Hotel when it first came out and nearly thirty years later it still haunts me. So when [producer] Laurence Bowen came to me and said that there was a script by Dennis Potter, who I adored, of that novel it was just a perfect opportunity for me. As much as this is an adaptation of a DM Thomas novel, Dennis’ voice is so alive in this script and his personality is all through it. It’s a rather magical feeling for me to be so close to my old friend again.”

Jeremy Howe, Radio 4 Commissioning Editor for Drama added “DM Thomas’ The White Hotel is an extraordinary book that elicited one of the finest screenplays from the legendary Dennis Potter. It is a disturbing, upsetting, heart-rending and sometimes shocking tale of pre-Second World War central Europe. It is a brilliant screenplay of a novel that shouts out to be made. I am delighted that Radio 4 has been able to make it.”