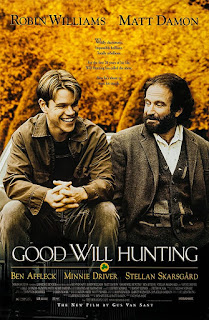 In search of a Matt Damon film to watch, Kraig Taylor-Bryant goes Good Will Hunting...

So, to help me appreciate certain actors and their rise to fame, I decided to take a step back to have a look at what successful films some well-known actors had featured in. Good Will Hunting is one that proves how good an actor Matt Damon is. He portrays the character of Will, someone born a genius but who, simply because he had a harsh childhood, became associated with a crowd that made him think differently to those typical 'smart people', whilst struggling with the mental impact that his father's abuse had on him. I also found it surprising that Robin Williams was featured in this film, with it being his first truly serious film role as Sean, the psychologist who helps Will, and this also drew me in.

What I found particularly interesting is how Will is treated by one of the professors teaching at the university that Will mops the floors for. The professor initially assumes that Will is drawing up graffiti on the hallway chalkboard, on which the professor hoped one of his students could solve an equation. But in fact, Will manages to solve it. It's interesting how this film deals with different social groups. Such as those that are typically muscly and horrible to those that are smarter in college/school years. The character of Will in this film is almost a character who was forced onto the bully side, but not entirely because of his knowledge, still having a clear idea of what's right and what's wrong, such as, by not randomly hurting people unless they deserve it (those being his morals in this film). It also promotes equality among social groups in a way as it presents the idea that you can be smart no matter where you're from, because some people do grow up with the idea that if you're born in a certain neighbourhood, then you shouldn’t be associated with them, but this film does a very good job of removing such prejudices.

The film also gives us, as an audience, a clear idea of the affects that physical abuse at an early age, can have on someone's life for its entirety, unless you can change the way of thinking that’s been drilled into your head over such a long time. We don’t see such abuse, or even really need to, in the film, we just need to listen to the phrases Will uses throughout.  This film cleverly sets an example for those have experienced something that this character has, it motivates them and helps them believe that sometimes you do just need to take on different opportunities without worrying about how it will affect your’ life “10 miles down the road” as Robin Williams’ character Sean put it. As the main psychologist of the film, Sean was made to be extremely relevant to the development of Will because he is one that Will can relate to. It seems as if this psychologist has suffered some psychological issues too, judging by the way he talks to Will about how lucky Will is because he hasn’t had to watch a friend die in his arms or have his “soul mate” (the term he uses) taken from him. Both of these kind of suggest that he could have had his own issues with the fact that he also mentioned that his father got drunk and hurt him, also suggesting that he had similar issues to Will and that he understands what he’s going through. It’s moments like this in film that could strongly impact someone who has experienced something similar and is suffering mentally because it lets them know that they’re not alone and the best way to go about improving their mental health is by talking with people who have experienced something similar. 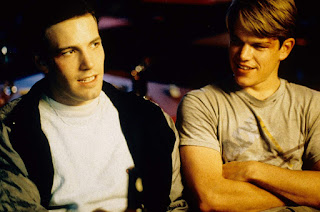 I also noticed a strong contrast in Will’s character between doing things that are wrong for the right reasons and doing things that are right for the wrong. So, what do I mean by this? Well, consider the fact that Will and his friend decided to go and beat up one guy and his gang because the one guy was being abusive to a girl on the street, Will then chose to do the wrong thing, which was to get in a fight with this person, but for the right reason, which was to protect someone. And it also goes for doing the right thing for the wrong reasons, when he decides to stand up for his friend by stopping him from being humiliated by one of the college students at the bar, but he does this for the wrong reasons because he’s also trying to humiliate the guy that is trying to humiliate his friend. In other words, he’s showing off with his knowledge. This is one of the moments in the film where he contrasts needless action with knowledge because he doesn’t have to humiliate the College guy to defend his friend, but chooses to, and does so by proving that he knows just as much as the guy who was embarrassing his friend by just reading a text book.

There’s many other stages when he contrasts needless/violent actions with knowledge, like when he acts angry and surprised that his psychologist chose to have a drink with a girl he liked instead of watching a famous baseball moment. There's a subtle hint at it when he states that he "doesn't care if Helen of Troy walked through the door!” demonstrating his knowledge once again but saying so in a loud and frustrated tone. The fact that he doesn’t understand the psychologist's actions, shows us as an audience that Will doesn’t properly understand what it’s like to love someone, which is also what makes it difficult for him to grow to love Skylar, not because he doesn’t, but because he doesn’t have experience with knowing what love is, and that’s what makes you feel empathy for him.

So, where else do we see the contrast between his needless/violent action and knowledge? Well just look at the title of the film. People who possess knowledge tend to be wise people that do things that benefit everyone. And the action to hunt, is usually seen as a violent action to try and kill something/someone, so we can see that contrast in just the words “good” and “hunting”. And of course, the title has a double meaning then as it can also mean that the main character is hunting (or searching) for his good will. It could even mean that from a psychologist's point of view they are looking for the good inside Will, as they’ve seen the "bad Will" through hearing of his violent acts and the reason he is on parole in the first place which all points towards his difficult childhood. 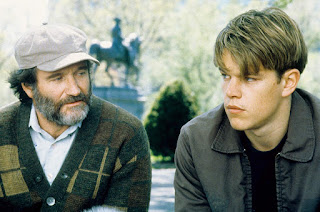 It's also interesting to note that he uses his way of thinking to figure out details about another person's life, not necessarily with the intention of hurting their feelings, but usually just with the intent of driving the conversation away from talking about himself, by using his quick and smart thinking. That is shown when he wants to call Skylar but becomes too afraid to, but when his friends ask why he didn’t take long, he just said that he forgot the number, but when they still wouldn’t let it go he said it was one of their mums' numbers in defence of his own privacy. And more obviously he does it with psychologists when they're trying to understand him, he focuses on details of how they react to certain things such as Sean (the psychologist played by Robin WIlliams) and the way he looks at a painting and thinks about it. I believe that in this moment Will realises that Sean is attempting to use Will's thoughts on the painting to understand him, and out of fear of this, mentions Sean's wife, and how he married the "wrong woman" to purposely frustrate him. That’s the part that really intrigued me because it’s a clear sign of him bringing out his bully side but also because of how smart he is, he was able to figure this out.

It's amazing how this film explores how a man who needs help but doesn’t want to be helped, goes through this journey of figuring himself out, not just mentally, but also figuring out what he wants to do with his life. And the fact that, to begin with, he just thinks he wants a simple life, such as laying brick, stating that it's an honourable profession. But his other friends and those around him see his potential for something greater and want him to aim for bigger, and his reasoning behind not wanting to work with someone upper class is because he might somehow result in someone innocent in a foreign country getting hurt because he solved an equation, but the fact that he is overthinking these things shows that he is simply scared to be something different to what he is, believing himself to be what his father thought of him as. But the message of this film for anyone is that if you find that you have a gift when it comes to anything, you just need to have the bravery to "cash it in" as the film often uses the gift that Will has through the metaphor of it being a lottery ticket to success in life. You just need to cash it in by giving it a shot, which is a great message to anyone working a job that they don’t like or aren't even very good at, that they can achieve greatness if you just do what you know you're good at. Overall, I think the journey he undertakes in this enticing, award winning film is just exceptional, this film is definitely worth watching.