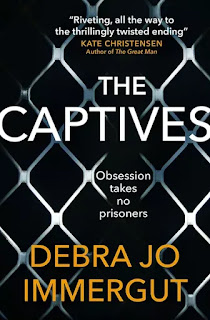 Was Steve Taylor-Bryant captivated or merely a captive audience as he read The Captives by Debra Jo Immergut...

"As an inmate psychologist at a state prison, Frank Lundquist has had his fair share of surprises. But nothing could possibly prepare him for the day in which his high school object of desire, Miranda Greene, walks into his office for an appointment. Still reeling from the scandal that cost him his Manhattan private practice and landed him in his unglamorous job at Milford Basin Correctional Facility in the first place, Frank knows he has an ethical duty to reassign Miranda’s case. But Miranda is just as beguiling as ever, and he’s insatiably curious: how did a beautiful high school sprinter and the promising daughter of a congressman end up incarcerated for a shocking crime? Even more compelling: though Frank remembers every word Miranda ever spoke to him, she gives no indication of having any idea who he is.

Inside the prison walls, Miranda is desperate and despairing, haunted by memories of a childhood tragedy, grappling with a family legacy of dodgy moral and political choices, and still trying to unwind the disastrous love that led to her downfall. And yet she is also grittily determined to retain some control over her fate. Frank quickly becomes a potent hope for her absolution—and maybe even her escape."

I genuinely think your enjoyment of The Captives is going to based on your expectation levels going in. If you hadn’t read that Debra Jo Immergut was a contributor to the Boston Globe and Wall Street Journal and an award winning writer, then your expectations of a certain writing quality would be different to mine; as it was, I expected something a little better crafted, something with a bit more polish. If you hadn’t read about the dual perspectives of the narration then maybe you would have gone into your reading a little less excited to read something a bit different to the norm. The expectations are important because I had read the press before the book's release, I had bought into the ideas of a tale told from two perspectives, I had got excited about a deep and thorough introspective into the psychology of being a captive. One imprisoned, a captive of the state for criminal acts, the other a captive of his own emotions and memories and a victim of unrequited love. Sounds enthralling doesn’t it? Sadly it didn’t live up to those expectations.

The dual narrative should have been immersive, or gripping, or any of the other descriptions used in the press and advance reviews but was a tad pedestrian, verging on boredom in places, taking sometimes three or four chapters to get to a point that could have been arrived at earlier which in turn led to a pacing issue. Whilst I enjoyed the look at prison life told through the eyes of Miranda I didn’t learn anything new and didn’t read anything I hadn’t seen before. When it came to the character of Frank there should have been some tangible passages, some bite to the story of a guy with split loyalties. Frank unfortunately came across as soppy, more high school theatrics than real world issues and was less sympathetic and more annoying.

The Captives broached some fascinating ideas but unfortunately came nowhere near delivering. I felt at times I was a beta reader of a debut author's first draft and had read enough to want to see a rewritten second with some pizzazz and some structure and some pace added. But this wasn’t a draft, this is the finished manuscript so I found parts of it lazy, none of it surprising and, by about page 180, I was just waiting for the book to put itself out of its misery.

Maybe I’m not who this book was aimed at, maybe a different type of reader will get something from The Captives I may have missed but, far from being captivated, all I got was disappointment and a longing for what could have been.