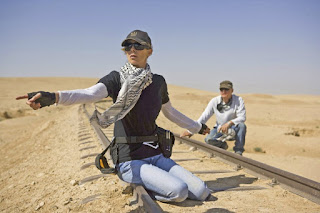 Number seven on The DreamCage Favourite Director's list is Kathryn Bigelow. Steve Taylor-Bryant takes a look at her work...


When it comes to celebrating the work of females within Hollywood it is hard to know where to start. Do you go back to Grace Kelly, Diana Dors and Marilyn Monroe? Should I look at more modern stars who I think brim with the talent to go far, maybe a Gyllenhaal or perhaps Amy Adams? No. There really is only one lady of the big screen that you start with and that is director Kathryn Bigelow. Bigelow came into my life early via the Patrick Swayze and Keanu Reeves surfing and robbery caper Point Break. I didn’t know at the time that the director, the key ingredient in any film succeeding, was a woman. Why would I? I am not hung up by gender in my screen loves, I just want to be moved and entertained. Recently though, modern life and the internet have thrown gender back into everyone’s home and, whilst it is sad that women need to be written about to catch up with men, I need no excuse to write about a genius.

Kathryn Bigelow outside of a film set is a talented painter which is no bad thing for a person who streams an artistic vision into our eyeballs. She also has a habit of filming in a first person perspective which can be uneasy for some viewers but is something I adore as it puts me right inside the character at that point of their story. Whilst her early career was strong with stints on Homicide: Life on the Streets and Wild Palms, and Point Break and K-19: The Widowmaker were both excellent films, it is a war film starring Jeremy Renner and set in the modern conflict that raged in Iraq that really blew Bigelow into the big time and she went on to be the first women to ever win the BAFTA and OSCAR as Best Director. The film, The Hurt Locker, itself was stunning. It didn’t use the usual Hollywood remit of glorifying war. If anything it put people off from signing up to serve their country and the words ‘Brutal,’ ‘Stark,’ and ‘Real’ will appear in any good review of the project. To burst onto the scene with such a touchy subject, especially in 2008 where the initial bravado for going to battle had began to wane, was beyond brave and I would be making that statement whether male or female.

Even the greats like Oliver Stone and Clint Eastwood only took on similar matters many years after the conflicts and the Oscar was well deserved for the look of the film, the telling of the tale and for, still to this day, dragging a performance out of Renner that no one else has achieved. There’s also the fact that in the Oscars the year after, Bigelow with her ‘little film’ beat not only the favourite, Avatar, in a few categories, she beat her ex-husband James Cameron to Best Picture.

After such an intense shoot in extreme conditions you would have forgiven any film maker for taking a break and taking an easy option so I was as surprised as any that Bigelow arrived on set to direct the story of Osama Bin Laden’s capture. Zero Dark Thirty was more a diary of the intelligence world spreading from the horrific 9/11 atrocity to the day Bin Laden was taken out by the U.S. Navy S.E.A.L.S and, whilst the entire cast were superb in their given roles, it was another lady of Hollywood that shone in the form of Jessica Chastain as Maya. The role of Maya was pivotal to the entire film working and Bigelow and Chastain portrayed her as a reluctant C.I.A operative, horrified by the torture of suspected Islamic terrorists by her own country but eventually pretty much responsible for the downfall of the world’s most notorious terrorist. And yet they managed to balance the objectivity of essential warfare manoeuvres with what is right and kept any personal politics from the screen. Chastain deservedly won the Golden Globe for Best Actress and both Chastain and Bigelow were nominated for Best Actress and Best Film at both the Oscars and the BAFTA awards, losing out to Jennifer Lawrence for Silver Linings Playbook and the equally superb Argo for best film.

Whilst I still pine for another Point Break style of film and would love Bigelow to take on a Butch Cassidy and The Sundance Kid remake with Jake Gyllenhaal and Brad Pitt, it is the untold tales of conflict that seem to bring the best out of Bigelow.

Artistic, brave, and extremely talented. The award winning, artistic, talented Kathryn Bigelow is needed by Hollywood a lot more than she will ever need them.