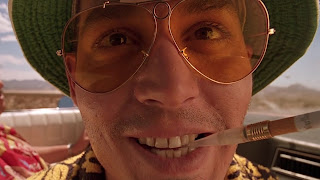 Number eight on The DreamCage Favourite Director's list is Terry Gilliam and Steve Taylor-Bryant was somewhere around Barstow, on the edge of the desert, when the drugs began to take hold...


Of all the times I have watched and loved Fear and Loathing in Las Vegas, it is only this last time, this time for reflection in preparation for this very article, that I have viewed it clean and sober. I spent a lot of my life battling various addictions, all of which manifest on screen in the movie, but during my ego driven hedonistic period I watched Fear as sometimes a comedy, sometimes as my own life on screen, but I very often it seems missed the point of the film, Hunter S. Thompson's lifelong search for the American Dream. Hunter had a great grasp of what life was, he understood people, no matter what state he was in physically and emotionally, better than they understood themselves and still he couldn't nail down what this American Dream was. It was a constant chase in all his books and articles and indeed many of his collected letters point to his inability to grasp what the American Dream actually meant.

There was madness in any direction, at any hour. You could strike sparks anywhere. There was a fantastic universal sense that whatever we were doing was right, that we were winning. 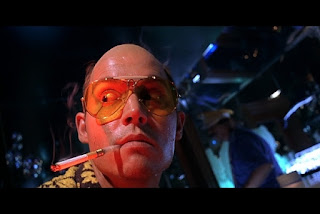 Never before has a film and book mash up excited as much as Fear and Loathing in Las Vegas. Nearly all films drift from the story and Fear is no different but it doesn't lose the essence of what was going on in the life Hunter S. Thompson at the time. The story is similar enough to what Thompson and his attorney Oscar Zeta Acosta went through and wrote about in the original book, and there are periods of the film with the perfectly cast Johnny Depp at the typewriter narrating actual passages that Thompson wrote that still give me chills. I have long loved the writing and life of Hunter S. Thompson to the point where I constantly go back to a book which is just a collection of his various letters which are more entertaining than most modern books. I have long admired Johnny Depp as an actor. He has taken brave choices of roles over the years and, whilst not of all of them have worked, my admiration has never dwindled and when he gets that role he is perfect for electricity happens in the viewer's mind. I am a huge Terry Gilliam fan, my favourite director of all time and another brave soul who takes on only projects he believes in and often shuns studios due to their meddling but another person who, when he gets it perfect, is sublime. Expectations are natural for a human being and whilst I do well to temper mine bringing my three heroes together in one project did raise my levels and cast doubt on my mind as to whether it work. I needn't have worried.

Never mind. Let's get right to the heart of this thing. Twenty-four hours ago we were sitting in the Pogo Lounge of the Beverly Heights Hotel, in the patio section of course, drinking Singapore Slings with mescal on the side, hiding from the brutish realities of this foul year of Our Lord, nineteen-hundred and seventy one.

After receiving a phone call from his magazine journalist Raoul Duke hires a red convertible, buys more drugs than I ever thought possible, and embarks with his attorney Dr Gonzo on a trip to Las Vegas to cover a desert motorcycle race. Between leaving Los Angeles and ruining Las Vegas they trip, drink, trip some more and meet various characters as they abandon the race in search of the American Dream.

We had two bags of grass, seventy-five pellets of mescaline, five sheets of high-powered blotter acid, a saltshaker half-full of cocaine, and a whole galaxy of multi-colored uppers, downers, screamers, laughers... Also, a quart of tequila, a quart of rum, a case of beer, a pint of raw ether, and two dozen amyls. Not that we needed all that for the trip, but once you get locked into a serious drug collection, the tendency is to push it as far as you can. The only thing that really worried me was the ether. There is nothing in the world more helpless and irresponsible and depraved than a man in the depths of an ether binge, and I knew we'd get into that rotten stuff pretty soon. 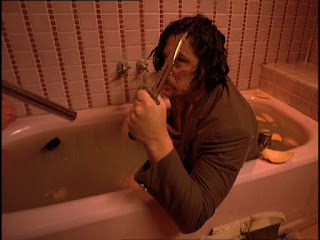 Fear and Loathing in Las Vegas raised the bar in acting for me. Depp is unrecognisable as Raoul Duke and glides from gorgeous narration to incoherence with ease and his comedic timing in most scenes is unrivalled. Benicio Del Toro as the attorney is extraordinary and his realism as shocking as it is brilliant. The bathtub scene is surreal, uncomfortable on the eyes, and possibly one of the best scenes in the history of cinema. Benicio Del Toro is the perfect foil for Depp and the scenes they share are as sublime as they are weird. Fear is not a proper film in the linear sense, more a collection of strange events thrown onto camera. The excesses of drug use and debauchery that not even Las Vegas can handle is the point. The American Dream is about excess, taking life to its limits and Fear represents the ultimate limit that searching for that excess can produce. The era is also a special one, coming out of the 1960's and the search for change into the 1970's and the realisation that essentially nothing changes. is the perfect backdrop for the darkness that drug abuse can bring on. The cameos in the film are spot on, from an ugly, strange looking Toby Maguire in his Ralph Steadman t-shirt as the hitch-hiker, through Thompson himself, Flea, a brilliant performance by Christina Ricci, a frightened waitress in Ellen Barkin to the incredibly bizarre and watchable Gary Busey as the lonely highway patrol policeman, every scene has you pointing to screen and shouting "oh look it's him/her from that thing!". The best character outside of the main two though is Gilliam's eye. Various filming techniques were used and his strange puppetry is evident but in certain scenes Gilliam films from the floor upwards bringing to life almost the 1970's carpets which unsettled me before we even got to the crux of the scene. 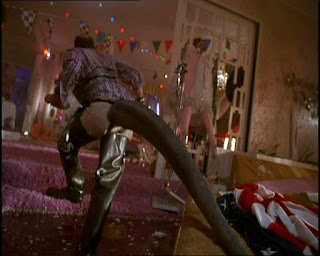 A drug person can learn to cope with things like seeing their dead grandmother crawling up their leg with a knife in her teeth. But no one should be asked to handle this trip.

Fear and Loathing in Las Vegas is not a film for everyone. Even my love of Gilliam, Depp and Thompson doesn't forgive the dialogue when Depp discusses renting out Ricci for rape at the hands of policemen, which shocked even me and I completely understand those film viewers who don't need that imagery in their lives, but as a display of filmmaking, as a view of acting outside the box, I don't think Fear will ever matched. As shockingly uncomfortable as it is brilliant, Fear and Loathing in Las Vegas is either a maximum score or unwatchable depending on who you are.

The possibility of physical and mental collapse is now very real. No sympathy for the Devil, keep that in mind. Buy the ticket, take the ride.