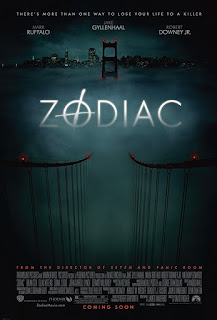 Number nine on The DreamCage Favourite Director's list is David Fincher. A reminder of Steve Taylor-Bryant's thoughts on Zodiac...

There are very few times in cinema where you watch something that is just perfect in every way. For journalism and politics there is All the President’s Men, the true story of Bob Woodward and Carl Bernstein as they investigate the details that led to the Watergate scandal and the eventual downfall of Richard Nixon. When it comes to police dramas, or any journalism films since ATPM if I’m honest, there have been great movies but none that gets anywhere near the levels of perfection that was achieved in 1976 with Redford and Hoffman. None that is until nearly thirty years later when David Fincher ended a five year absence from the big screen and returned with an adaptation of the true story of the search for the elusive Zodiac killer.

I vaguely remember watching Zodiac on release but I wasn’t in the place in my life where any film meant too much to me any more and I had also waned in my interest of all things serial killer, the world was dark enough, so Zodiac became one of those films that I had seen but didn’t really think about. Skip forward a couple of years and I got to a better life place, my interests had returned and pop culture was beginning to mean stuff to me again. I had returned to consuming books on killers, and happened upon a new theory about who the Zodiac killer may have been, Louis Joseph Myers. This rumour wasn’t without complete merit but, again, as with all the other lines of inquiry, there was very little proof. It had done enough though to spark my interest again and, since then, I have watched Zodiac at least twice a year.

The story, written by for the screen by James Vanderbilt, was based on Robert Graysmith’s book. Graysmith was a cartoonist for a San Francisco newspaper when the first letter and cypher came in from the self named Zodiac and this is where the film gets really good. Graysmith is played by the always superb Jake Gyllenhaal. A new member of the team at the paper and almost shunned by his colleagues, Graysmith is an Eagle Scout, he enjoys puzzles and quickly becomes obsessed with working out who the Zodiac killer is. Hard partying reporter, Paul Avery (Robert Downey Jr.) takes lead for the paper with his articles, whilst the police investigation is headed by two detectives, Inspector William Armstrong (Anthony Edwards), who is becoming tired and worn down by the never ending violence his job is surrounded in, and Inspector David Toschi (Mark Ruffalo), the inspiration behind Dirty Harry and consultant to Steve McQueen on Bullitt, but who isn’t the fast and loose, action filled detective his screen personas portray. He is more a by the book, follow the evidence type and the lack of that evidence is frustrating him. Eventually a suspect as good as any is tracked down, Arthur Leigh Allen (John Carroll Lynch) and, whilst the point of all the investigations both police led and from Graysmith’s obsession, seem to undeniably finger Allen as the culprit, it can't be proved as there is a massive lack of evidence.

What I loved about Fincher’s take on events is that there was no glorifying of the murders, this was no “Hollywood” take on the serial killer. Instead, it was all about the characters involved on all sides of the investigation and, with the constant date reminders on the bottom of the screen, it was a story more of the frustrating passage of time, the failure within talented and dedicated men to achieve the goals they set for themselves and their community. There were no huge car chases, there were no hyped up action scenes or chasing down and shooting of the perp a la Dirty Harry, it was dark in its tone, full of anger at the crimes, annoyance at never quite getting the break required to prevent more devastating loss of life. It's full of irritation at the Zodiac himself (I’m still presuming it was a man and make no apology for that presumption) for maybe claiming credit for murders that weren’t his, leading investigators on a merry dance. Many of the scenes are shot at night or inside so the entire palette of Harris Savides, the Director of Photography, is dark, full of shadow, and lacking in anything bright, with the exception of the blue cocktail that Graysmith drinks. There is something quite stunning about a film that embraces the darkness of its content and narrative so well and uses that for its filters. Add in exceptional, almost compulsive, perfection seeking in every scene by Fincher and a cast that just need to impress every time they are on screen and you have a film that delights as well as horrifies, and refreshes your belief that perfect films can indeed be made, even if, sometimes, they come thirty years apart.