Doctor Who - The Curse of the Black Spot 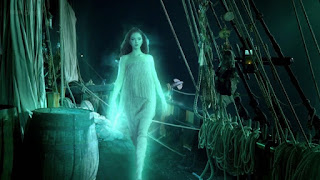 Our Doctor Who expert, Tony Cross, is journeying through all of time and space to bring us his thoughts on every available Doctor Episode. Today is the Eleventh Doctor adventure The Curse of the Black Spot...

Apart from that though it is disjointed and rather inconsequential.

In fact it is one of the few episodes of New Doctor Who when you wonder if anyone was paying attention in the edit. Of note is the sudden and unexplained disappearance of Lee Ross's character - who is credited as 'The Boatswain'. One minute he's there. One minute he's gone. No one explains why. No one appears to care, which isn't a good sign.

I like Pirates. I've still got a soft spot for Treasure Island, which is the book I would read to any child of mine (should I have any) as they were growing up. I like the way that Captain Avery is a casual throwback to The Smugglers but...but...it's just empty.

There's too much piffle, not enough action. The threat - even if this story is written by Steven Thompson - is the classic Moff era 'non-threat'. It's all another misunderstanding. And the Doctor is particularly useless in this. Constantly making wrong guesses about what the threat is and then making a drastic leap of faith right near the end which leads them to a solution. Or at least to the final act.

The threat - the Siren - is played by Lily Cole. She's a lovely, strange looking woman Lily Cole and that helps with some added CGI to make her look suitably ethereal and alien but that's about it. The demon-fire stuff is good but, in the end, it is all a bit of a nothing.

And that more than anything else is the criticism of this story. It's a place-filler. An idea - let's do a Pirate story - that doesn't really live up to whatever the expectations were when it was originally mooted.

There's bits of good stuff scattered in there among the nothing: the ship looks great; the costumes are fine; the scene where Amy comes to rescue the Doctor is rather good; Hugh Bonneville does a fine job as Captain Avery, which isn't the best part in the history of Doctor Who...it's just frustrating. Inside this is a story that might have been something. If it had been darker, slower and less flash. There's no point having fab special effects if the story around it has no real power. It's like sticking lights on a stick (to make a slightly less rude analogy than the traditional one about polishing turds. Which I've now mentioned. So, what was the point. [Shrugs])

In fact I'm trying to draw this review out for the sake of not just writing: "Curse of the Black Spot. It's rubbish." I know people don't set out to make bad episodes. In my opinion most, bad stories have inside them a good idea. Or even a great idea. It's often lost in the process of taking that idea and turning it into the televised episode. In new Doctor Who I think a lot of the problems come from hacking the story down to fit the forty-five-minute slot. Would The Curse of the Black Spot be better if it was two episodes long? Possibly not. But another ten minutes might have helped. Or a different edit. Or something.

And with that I think I'm done.

Not the worst ever Doctor Who episode. Not even the worst ever episode of New Who. But a rather lacklustre, untidy damp squib of a thing lifted from total disaster by Hugh Bonneville really.