Doctor Who - The Doctor's Wife 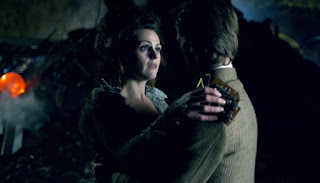 Our Doctor Who expert, Tony Cross, is journeying through all of time and space to bring us his thoughts on every available Doctor Episode. Today is the Eleventh Doctor adventure The Doctor's Wife...

Before I go wanking on I think I should come out and say that The Doctor's Wife is one of my favourite episodes of Doctor Who. I understand, like all Doctor Who, that there are people out there that don't like it. Well, you’re entitled to your incorrect opinion, as I am to mine.

The reason this episode works so well isn't just Neil Gaiman's script, which is something of a game-changer in Doctor Who terms. At least until The Moff...sorry...I'm getting ahead of myself here. Instead of the Doctor being just an aimless wanderer in time and space The Doctor's Wife basically puts into words what a lot of us had ultimately expected: "No, but I always took you where you needed to go."

After all the Doctor's always dropping into the middle of trouble and why wouldn't it be because the TARDIS is deliberately taking him to the places where he can be of most help. Yes, it is a risky proposition but it's fun. And it was the TARDIS as much as the Doctor who wanted to get out there and see the universe.

Putting the TARDIS's 'matrix' into a real human (?) body gives the Doctor a chance to properly interact with her - and her it must be for this - for the first time. The fact that Idris comes in the form of the rather fetching Suranne Jones is just a bonus. Or as Amy says when The Doctor introduces them: "Did you wish really hard?" Their chance to talk doesn't last long and I'm not afraid to admit that the last scene between them does make me a little teary. Idris's speech about being alive and the little goodbye/hello bait and switch is well-written and heart-breakingly performed.

I'll stick my neck out a bit here and say that this episode stands (or might have fallen) on Suranne Jones's performance as Idris. Too much and it would have been terrible, too little and it wouldn't have packed the emotional punch it did. How do you play a 11-dimensional folded matrix scattered across all space and time in human form? Where do you even begin? Wherever it was Suranne Jones nailed it. Costumed like an escapee from a Tim Burton movie she's brilliant from start to finish. The eccentricity and the seriousness. I love the scene when Idris and the Doctor survey the wreckage of hundreds of TARDISes. It's moving, clever and a rather lovely tribute to the Doctor and Doctor Who without being unsubtle.

Actually there isn't a dud performance in this, even though the cast is so small. Adrian Schiller (as Uncle) and Elizabeth Berrington (as Aunty) give minor parts a pathos they might not deserve. There's no real explanation as to who they were or are (or what Idris was before she was occupied by the TARDIS - the truly horrific bit of this story).

Arthur Darvill and Karen Gillan do sterling work as Rory and Amy, especially when they're stranded in the House occupied TARDIS and House starts playing little tricks with their minds. They're certainly having their relationship tested those two. They've become a sort of twisted version of that expression, "Whatever doesn't (or in this case does) kill you, only makes you stronger."

On the subject of House, Michael Sheen gives a great vocal performance. The combination of intelligence, darkness and arrogance gives House a creepiness above his actual presence, which is the visual equivalent of throwaway.

But best of all is Matt Smith. This is a real display of his talents as the Doctor. I think this was the story that pushed me to putting Matt Smith above Tom Baker as my favourite Doctor - at least for a short while. It's filled with great scenes for him: his excitement when the message arrives in the TARDIS, his anger and sadness when he sees all the little boxes, the scene surveying the TARDIS graveyard and everything that happens in the TARDIS after everyone is back together. But most of all every scene where he's interacting with Suranne Jones. The two of them are great together as this old-married couple. I could watch their scenes together repeatedly.

Having said all that I go back to my original Suranne Jones comment. This story stands up so well because she is so brilliant. Without her strong performance it would have been unbalanced. This story is so good because she's as strong as Matt Smith.

We come back here to the classic conundrum. Is the acting as good as it is because the script is good? I'd say in this case yes. It's a fine piece of writing. It's both a good standalone story and a lovely tribute to Doctor Who as a programme. Now I'm not a Gaiman fanboy - as you'll find out when we get to Nightmare in Silver* - but this is a brilliant piece of work.

I've said it before and I'll say it again - probably ad infinitum - it is harder to write an article when you love a story. Taking a terrible story to pieces is easy. Perhaps that says something about me. Or humanity in general. If one can arrogantly extrapolate the behavioural problems of an entire species from the writing quirks of one individual. Which you probably can't.

So to cut this short. I loved it.

I hope you do too.