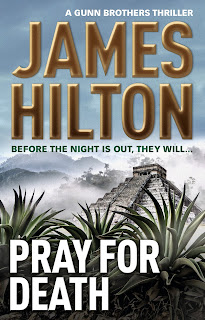 The third book to feature the Gunn brothers, Titan Books announces the publication in October of James Hilton's Pray for Death...

Brothers Danny and Clay Gunn were brought up an ocean apart. Both served in the military, and both know how to kill, taking work as private military contractors and freelance “fixers”. Celine Chavez is the closest thing to a daughter that Clay Gunn has. But now she has disappeared while vacationing in Mexico. Clay and his brother Danny must venture into the ultra-violent criminal underworld to bring her home. From the bright lights of Cancún to a living nightmare in the wildest jungles of the Yucatán, the Gunn brothers face the direst of enemies yet. One thing is for sure: if they survive, the Gunn brothers will never be the same again.

Brother of acclaimed thriller author Matt Hilton, James Hilton is the newest addition to the Hilton crime-writing dynasty. A Fourth Dan Blackbelt in Shotokan Karate and a trained martial arts instructor, he is the author of several popular Kindle-release titles and short stories. Search and Destroy, the first in the Gunn Brothers series, was his debut crime novel. He is based in Carlisle in the UK.

Pray for Death comes out on 16th October.