Doctor Who - The Time of Angels & Flesh and Stone 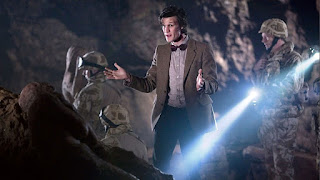 Our Doctor Who expert, Tony Cross, is journeying through all of time and space to bring us his thoughts on every available Doctor Episode. Today is the Eleventh Doctor adventures The Time of Angels & Flesh and Stone...

Overall, I enjoyed both The Time of Angels and Flesh and Stone. Although there were a couple of things that irritated the hell out of me.

Right, I don't mind River Song as a character most of the time. Even if the idea of the Doctor running around the universe as a taxi service rescuing anyone seems a bit odd. If he could do that why is he not constantly picking up and dropping off companions? Oh, I hear you cry, River Song's special.

Yes, I'm sure she will be. But at this point she seems irritatingly over-confident and pushy. The sort of person for whom the phrase 'high maintenance' was invented. She can't just fly the TARDIS, she can fly it better than the Doctor. Oh and that joke about the handbrakes was worth it wasn't it. Ha ha. And never heard of again. Indeed so never heard from again that the Moff makes the sound of the TARDIS materialisation the sound of hope by the time we get to The Day of the Doctor. (Oops spoilers).

I'm not sure how much I can blame Alex Kingston for her choices or the original character outline for this but it's bloody irritating. Although - to be fair to everyone - it does calm down a bit after the initial twenty minutes or so.

The other irritating thing was the Moff's decision to turn the Weeping Angels into cold blooded killers. OK so their original modus operandi didn't make much sense but at least it made them different to your bog standard beasties. It doesn't reduce their creepiness I will admit but then that creepiness was there when they didn't break people's necks. Or whatever it is they actually do.

It does present us with the nasty form of poor old Angel Bob though whose fate is rather unpleasant and clearly has an effect on the Doctor's response to the Angel's, which leads to the 'Into a trap' cliff-hanger which Matt Smith delivers with some panache. And on DVD at least it wasn't ruined by the voice of Graham Norton. (Although I'm surprised that option wasn't available on the DVD for that full 'as live' experience).

Those are probably my only complaints. The rest of it is damn good. ﻿ 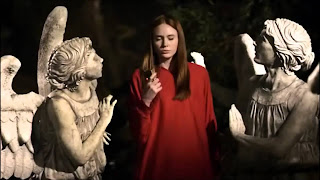 Karen Gillan is starting to grow on me as Amy Pond and her walk through the Forest of Angels is incredibly tense, although it's a shame she must come over all Susan and trip over, especially as she's...well let us move on. Oh, and bonus points for the countdown to the Moff. That was nicely done and rather spooky.

Matt Smith is excellent. There's some lovely moments but the best for me are the 'Trap' speech as outlined above, the 'Hold On' moment and best of all Octavian's death (which is to some degree the Doctor's fault for faffing around too much.)

In fact my favourite thing in this whole story is Iain Glen's Octavian. No one ever seems to bring his performance up when talking about guest appearances but he's brilliant and his death scene is one of the most moving and brilliantly played in all Doctor Who history. I'm a big fan of Iain Glen's and have been since I saw him in a rather fantastic little series called 'Frankie's House' back in the early 1990s. He's been on my list of possible Doctor's for a while too. So, it was nice to see him do such a fantastic job throughout.

So, my early complaints aside I should reiterate how much I did enjoy this. It looked fantastic, had a real tension about it from the moment we first see the Angel on video to the end...and I liked the fact that the Angels sealed their own fate.

It also keeps the arc ticking along nicely as we see the crack from Amy's wall appearing and doing some rather unpleasant things to soldiers and Angels alike.

A much-needed improvement on Victory of the Daleks and perhaps the sign of good things to come.

Ah, one final not so sure about it moment. The end of the episode with Amy trying to get off with the Doctor. I'm not sure if that doesn't quite cross a line that Doctor Who shouldn't cross. I'm not entirely sure but it felt a bit awkwardly tacked on to me. But we shall see.

Good stuff. More of this please.